skip to main content
Return to Fordham University
You are at:Home»Inside Fordham»Ethics of Sustainability Debated at Forum 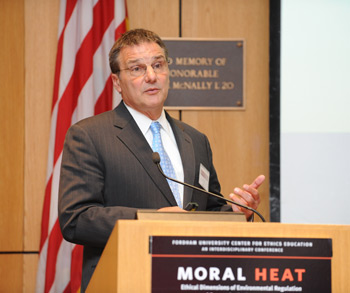 John Filippelli tells the audience that climate change directly affects all of the EPA’s other initiatives.
Photo by Chris Taggart

The deep moral and ethical implications of climate change for the Earth’s population was the focus of an all-day conference on April 20 at Fordham.

Speaking at “Moral Heat: Ethical Dimensions of Environmental Regulation and Economics in the 21st Century,” scholars, business leaders and federal regulators acknowledged the seriousness of climate change. They offered ethical solutions, key among which were regulatory increases by the federal Environmental Protection Agency (EPA).

“The EPA has a core mission of providing clean air, providing clean water and reducing waste,” said John Filippelli, an EPA chief of strategic planning and multimedia programs. “But every other partnering initiative will be affected by climate change.”

Since President Obama appointed Lisa Jackson as the EPA’s administrator, the agency has taken on a much more active role in helping to regulate the causes of climate change, said Filippelli and a co-worker, Warren Lux, the EPA’s director of human research ethics.

In fact, the EPA recently enacted regulations requiring the monitoring and reporting of annual greenhouse gas (GHG) emissions from large GHG emitters, after determining that such emissions were endangering public health.

“One year later, the EPA has an expanded vision of its priorities,” Lux said. “There is a focus on compliance and oversight.”

Lux went on to outline two of the newest EPA initiatives that call for more environmental justice principles to be reflected in all of the EPA’s decisions, and for building partnerships to facilitate better enforcement and compliance at the grassroots level.

Pai-Yei Whung, chief scientist in the EPA’s Office of the Science Advisor, outlined how greenhouse gases caused by carbon dioxide and black carbon emissions affect the health of all living systems on Earth.

“We look at health and climate change impact from a more comprehensive ‘One Health’ perspective,” Whung said.

She outlined the connections between human health, agricultural and animal health, ecosystem health and the health of the world’s oceans.

“By capitalizing on the natural links between animal and human health, One Health seeks to improve the health of all species,” she said.

“We have six million customers who are very sensitive to environmental concerns, but they are also concerned with price,” said Caroselli, whose company has made a commitment to 80 percent carbon reduction by 2050.

To create affordable sustainability, National Grid has begun an ad campaign to encourage its customers toward a voluntary 3 percent reduction in energy use—saving customers’ money while saving energy.

“We’ve gotten a lot of comments about how this [campaign]flies in the face of making money,” Caroselli said, “but we want to be leaders in this [green]movement.”

The day’s participants acknowledged skepticism about climate change that permeated the political landscape.

“I encourage you in academic institutions to keep rational public debate alive,” Filippelli said. “One of the things hurting public debate is sound bites.”

The conference was a joint effort by Fordham’s Center for Ethics Education, Schools of Business Administration, and the EPA, with support from National Grid. In welcoming conference attendees, Joseph M. McShane, S.J., president of Fordham, said that humans hold the Earth in stewardship.

“The world was created by a loving God to be held in trust while we are here for the generations to follow,” Father McShane said. “So there is a moral imperative involved in the pursuit of a more environmentally sane policy for us all.”