skip to main content
Return to Fordham University
You are at:Home»Inside Fordham»Entomologist Studies the Evolution of Helpful Bacteria in Insects 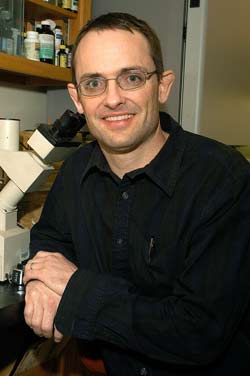 As a member of the sap-sucking family of insects, an aphid’s meals are limited to the sticky nutrients it siphons from plants. While its diet of sap is rich in carbohydrates, the aphid needs more than sugar and starch to survive.

The insect has thrived—and become a major destroyer of crops—thanks to Buchnera aphidicola, a bacterium that lives in the aphid and provides amino acids and other necessary nutrients that can’t be acquired from plant sap. The relationship between the insect and its symbiont stretches back millions of years.

Deciphering how this relationship—and others like it—began and developed is the work of Gordon R. Plague, Ph.D., assistant professor of biology at Fordham’s Louis Calder Center Biological Field Station in Armonk, N.Y.

“It’s conservatively estimated that 10 percent of all insect species have obligate associations with bacteria,” said Plague, an expert in evolutionary biology. “There are more than one million described species of insects, so at least 100,000 species have these associations.”

Bacteria including Buchnera aphidicola live in specialized host cells that have evolved over time. The cells are warm, stable places where the symbionts consume food delivered by the insects and produce nutrients not found in their hosts’ diets.

“Most people who work on this suspect that the relationships started because these bacteria were pathogens; they wanted to live in host cells,” he said. “But once the change was made from horizontal transmission (virulent invasion from one host to another) to vertical transmission (transfer from mother to offspring), it became in the best interest of the bacteria to help their hosts.”

Whenever bacteria live in animal cells, whether they are pathogens or symbionts, they go through a bottleneck every time they invade a new host. These population crashes have important evolutionary implications for the bacteria.

In particular, genetic mutations have a higher likelihood of becoming fixed just by chance in small populations, thus potentially swamping out the effects of natural selection (when a new mutation becomes common because it provides some benefit to the bearer). This random evolution is called genetic drift.

To understand genetic drift, take the example of a female insect with 100,000 bacteria. When this insect lays an egg, maybe only 1,000 bacteria will make it into the egg. But there’s no way to ensure that the best bacteria are chosen.

“Imagine a room with 100 people and all of a sudden the roof opens up and two people are selected to seed a new population on an island. If the choice of people is totally random, they may not be the most fit people in the room,” Plague explained.

Studying the role of genetic drift in these bacteria has become an integral element of Plague’s research. He suspects that this is part of what’s causing an increase in transposable elements—mobile pieces of genetic material—within many host-associated bacteria.

“Transposable elements are highly important,” he said. “When they start proliferating within pathogens, they can have huge structural effects. If they are inserted into a necessary gene, the effects can be lethal.”

To test the theory, Plague is evolving 12 populations of E. coli, which is the bacterial equivalent of the white lab rat. These populations stemmed from the same ancestor and were separated into four groups. The groups differ based on the population size (large vs. small) and the nutritional quality of their growth medium (rich in nutrients vs. lacking nutrients).

“The plan is to evolve them for 5,000 generations,” Plague said. “The populations go through six generations a day, so it’s going to take us a few years to do.”

If his hypothesis is correct, the group that evolves in a manner and environment that is similar to a host insect (small population in a nutrient-rich solution) will feature a high level of transposable elements.

“We’re essentially evolving bacterial symbionts from scratch, which has never been done before. With the data we collect, we should be able to address a treasure trove of questions,” he said. “This is a project where students and post-docs could come in and be limited only by their creativity in terms of what questions they could ask.”

Although the Calder Center is seemingly an ideal place for any biologist to pursue his or her research, Plague wasn’t born with an eye for the natural world. Instead, it was a love of evolution and a knack for research that led Plague to his chosen field. As an undergraduate at the University of Kansas, he dumped business studies when he took a physical anthropology class on the evolution of hominids.

“I loved human ancestry and talking about the great apes, and that directed my search for a new major,” he said. “It didn’t take long to figure out it wasn’t necessarily the apes that I liked; it was the evolutionary concepts.”

Undergraduate research in the entomology department led to an interest in insects, while the doctoral program in entomology at the University of Georgia fostered an appreciation of the power of bacteria. By the time he began post-doc studies at the University of Arizona, technology was coming on line that would revolutionize his field.

“Work on these insects was really starting to get amped up in the mid-1990s because the bacteria couldn’t really be studied until that point. A large number of questions couldn’t be addressed until the DNA revolution—the ability to amplify and sequence DNA,” Plague said.

That same technology is helping Plague answer the questions posed by his latest project. “One of the nice things about my research is that it will tell us how repeatable evolution is,” he said. “If we keep it going, we’ll just increase the number of questions we can address.”