skip to main content
Return to Fordham University
You are at:Home»Faculty Profiles»English Scholar Uncovers Real Story Behind the American Dream 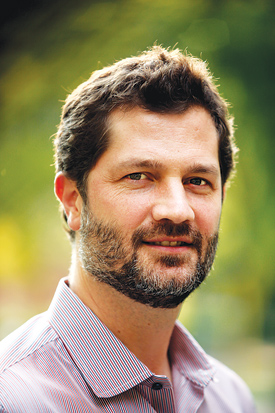 The American dream has long been held as a fundamental tenet of American life.

So most of us would be surprised to find out that the idea behind the dream isn’t actually American, said Edward Cahill, Ph.D., associate professor of English and an expert on American literature of the 17th, 18th, and 19th centuries.

Cahill, the author of Liberty of the Imagination: Aesthetic Theory, Literary Form, and Politics in the Early United States(University of Pennsylvania Press, 2012), recently turned his focus to 17th- and 18th-century upward mobility narratives, the earliest portrayals of what has been christened the American Dream. Between their lines, these narratives depict the nation’s emerging politics, attitudes toward wealth, and permeable social classes.

“These are stories of wealth acquisition and status transformation, striving and rising, which we very comfortably think of as something one does in America as opposed to somewhere else,” said Cahill, who directs the English graduate program. “[But] my research tells me that the British invented it, and that we borrow most of those ideas from them.”

“Stories about rising circulated widely in early modern England well before they did in America. The context of colonialism did a lot to tear down class boundaries and make new wealth possible, but that’s not to say mobility wasn’t also happening in and around London, and elsewhere in the Atlantic world. Because it was.”

Upward mobility narratives became popular in America in the 19th century in part because of figures such as Benjamin Franklin. A soap maker’s son turned American luminary and one of the nation’s founding fathers, Franklin wrote extensively on the topic of wealth acquisition in his autobiography.

The secret to his self-made success, he wrote, was to save money.

“That’s been a popular notion for a long time, because it offers a promise to the poor, and it’s non-threatening to the wealthy and powerful,” Cahill said. “Franklin borrowed his ideas from lots of different sources… Yet we see him as the progenitor of this tradition rather than as someone who inherited it.”

The American dream as Franklin articulated it has changed, however. About 20 years ago, in the wake of the technology revolution and the financialization of the economy, the culture of wealth acquisition began to alter the structure of American society, said Cahill.

“On the one hand you had a lot more people becoming fabulously wealthy—the number of millionaires grew exponentially. At the same time, the wealth gap between the rich and the poor grew exponentially, too. It’s a startling paradox,” Cahill said. “The rich were getting larger in number as the poor were getting larger in number.”

As a result, Cahill said, the idea of the American dream has become so expansive that it is almost meaningless.

“It has become such a capacious idea that it means virtually nothing.”

Cahill tells his students to think about these ideas in the context of the upcoming elections, and to note how each candidate’s rhetoric reveals a unique interpretation of the American dream.

“Both presidential candidates regularly speak of an American dream, so I ask my students to listen carefully to such rhetoric and try to discern its implicit assumptions—who it includes and excludes, what it counts as success—and then decide which candidate is more credible,” he said.

However, Cahill added, what is often missing from discussions of the upward mobility story is the reason to acquire wealth—a point that Franklin in particular emphasized in a portion of his autobiography that was not even in print until 1817.

“The second half of Franklin’s autobiography is largely about his commitment to public service,” he said. “He believed that the reason you seek wealth is to pursue virtue. Because if you’re busy scrambling for food and shelter, how can you possibly be virtuous?”

“Franklin’s point is very clear,” he continued. “The aim of upward mobility is two-fold: first you focus on yourself, and then, once you can, you focus on other people.”

Cahill strives to qualify the idea of wealth acquisition for his students by emphasizing these commonly overlooked reasons.

“Unfortunately, our culture has become obsessed with affluence. We now believe that it’s our God-given right to live affluent lives,” he said.

Cahill cautions against training students for “affluence rather than training them for meaningful lives.”

“When you teach literature, you try to interest your students in the complexities of meaning, experience, and perspective,” he said. “A single-minded focus on achieving affluence tends to ignore these complexities and short-circuits the richness of life by making it merely instrumental.

“A life well-lived requires a lot more than money and nice stuff.”