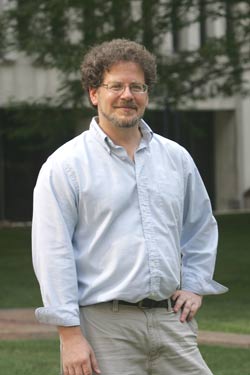 Sometimes monsters tell us more about ourselves than we realize.

The archetype of the serial killer, as it appears in film and literature, did not spring into the American cultural consciousness by accident, said Leonard Cassuto, Ph.D., an English professor at Fordham College at Lincoln Center.

A lifelong lover of crime fiction, Cassuto has penned a cultural history of the genre that focuses on what it can tell us about the fears of the American family, including the symbolic nature of the serial killer.

In the forthcoming Hard-Boiled Sentimentality: The Secret History of American Crime Stories(Columbia University Press, 2008), Cassuto suggests that crime fiction is the literary heir of the sentimental fiction that was popular in the 19th century.

His second book, it joins a rich selection of edited volumes and writing for academic journals and popular publications, such as The Wall Street Journal, The Boston Globe and The Chronicle of Higher Education.

When his daughter was born nine years ago, reading crime fiction gave Cassuto a respite from the duties of caring for an infant. He was immersed in James M. Cain’s Mildred Pierce(1941) when he began to recognize parallels between the novel and sentimental fiction written by women of an earlier time.
S
entimental fiction routinely charted the journey of unsuspecting characters, usually young women, who aim to overcome forces that threaten to destroy their connections to family, faith, and community.

“As I was reading crime fiction, just to keep myself alert and amused, I started seeing more and more of these parallels and they started looking richer and richer and I realized I had something more,” he said. “So I started keeping a file, and it didn’t take long for me to realize I had a book.”

Cassuto’s interest in the rise of serial killers in fiction was another element that led him to his latest book. Already he had examined the subject of monsters in his 1997 book, The Inhuman Race: The Racial Grotesque in American in American Literature and Culture.

This is noteworthy because, Cassuto explains, serial killers are the ultimate anti-family figures. Although real-life serial killers tend to prey on weakest members of society—such as prostitutes, drifters, the homeless—in novels, they target socially connected people who tend to have families.

To show how fictionalized serial killers differ from their real-life counterparts, Cassuto points to the “Tooth Fairy” in Thomas Harris’s book Red Dragon. In Red Dragon, the killer chooses the families he’s going to slay by looking at pictures they send to the photo lab at which he works. He then selects the ones that appear the most wholesome.

Their appearance in film and literature tends to symbolically represent real threats to the idealized American family, he explained. To understand why writers might use Jack the Ripper or Hannibal Lecter to tell readers that the American family is in trouble, Cassuto suggested that our culture still clings to an earlier sentimental ideal of what a family should be—a working dad, a stay-at-home mom and children, all living in the middle-class family home.

This ideal—which emerged in the early nineteenth century—has never described a majority of American families, Cassuto explains, but it has long provided the basis for the idealized American family. This idealized family image has come under increasing pressure since the 1960s from changes in both economics and demographics.

“The old imaginary picture has drifted further and further away from the reality of today’s American middle class,” Cassuto said. “How many people do you know who live like Ozzie and Harriet?”

These changes have ignited fears in some that the traditional family is less powerful and socially valuable.

“I don’t want to say we’re at a crossroads because in some sense we’ve been here for a long time, in the United States, about how to address the question of so-called family values,” he said. “But there’s a lack of vocabulary, a lack of alternatives—and crime fiction, oddly enough, is a genre that expresses the anxiety over the state of the family particularly strongly.”

In addition to Hard Boiled, Cassuto is editing The Cambridge History of the American Novel, an ambitious reference work with entries from 70 contributors. Once all the entries are in, he will shape the contributions and set up intramural dialogues. He is also quick to insist that an important facet of his work at Fordham, where he has taught since 1989 after earning a doctorate at Harvard, is teaching, from core classes to the mentoring of graduate students.

Kathy Knapp entered graduate school 10 years after her undergraduate graduation, and earned her doctorate in English in 2007. Now an assistant professor in English at the University of Connecticut, she said that her dissertation, which analyzed how contemporary novels about suburbia fail to accurately portray reality, is infinitely better thanks to Cassuto’s guidance.

“He’d say something like, ‘Take a look at this if you haven’t already,’ which would be a casual reference to a 400-page book. I will be seeking his advice for the rest of my professional life. He’s a great model for how to live the academic life.”