skip to main content
Return to Fordham University
You are at:Home»Editor's Picks»Elderly Elm Stands Guard for More Than 270 Years 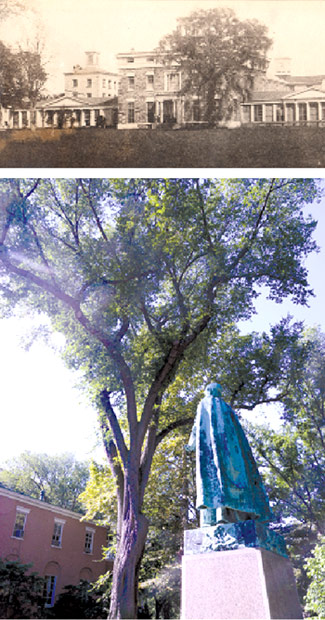 Top: The elm in in 1864. Above: Fordham’s oldest elm stands in front of Cunniffe House.

Standing over Cunniffe House like a proud sentry is an American elm tree estimated to be more than 270 years old. With the majority of the nation’s ullmus Americana threatened by Dutch elm disease, the tree is testament to staying power. Now, the University is seeking to reward the campus’s oldest living resident by lobbying to get it listed on the National Register of Big Trees.

“This elm tree is older than the University,” said Marco A. Valera, vice president for facilities management. “We believe it was here before the oldest buildings were constructed.”

More than 500 trees inhabit Rose Hill’s nearly 90 acres. And while the University’s maintenance staff cares for all the trees year-round, for the past eight years arborists from Emerald Tree Care have been paying periodic visits to the campus to check in on the trees, and on the Cunniffe House elm in particular. Emerald also maintains trees at the New York Botanical Garden and the Bronx Zoo.

“Fordham is very dedicated in preserving these elm trees,” said Steve Farrelly, a master arborist with Emerald. “We monitor them and if we see any disease in the tree we cut it out right away.”

In addition to monitoring, Emerald’s staff also removes weak and poorly structured branches, thus explaining scars on the old elm where branches once reached out. Several small holes, or ports, at the base of the trunk allow for liquid fertilization to be injected directly into the tree. And every other year Emerald inoculates all the trees against Dutch elm disease.

For the day-to-day monitoring, a team of maintenance workers led by Rafael Rivera, grounds manager at Rose Hill, keeps a keen eye on all trees, but especially the elms. Walking through the campus, Rivera points out each elm individually as if nodding to an old friend.

“The elm branches have this twisting motion so that they don’t just go to the right or to the left. They almost claw over each creating a huge canopy. The leaves have a serrated edge like a circular saw.”

Should the National Register of Big Trees consider listing the Fordham elm, it would join a small roster of other awards bestowed upon Fordham’s grounds. In 1999, the National Arborists Association recognized Emerald’s and Fordham’s staff with an award for Excellence in Arboriculture for their care of the elms. And in 2010, the team took home the Grand Green Star Award from Professional Grounds Management Society.