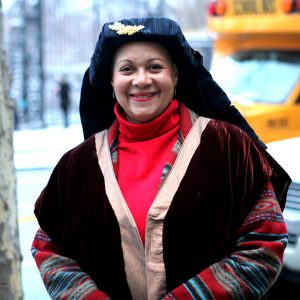 Call it the Epiphany, Three Kings Day, or Día de Los Tres Reyes. No matter the name, the feast celebrates when the Magi brought gifts to the baby Jesus.

Each year, at the top of New York’s Museum Mile, El Museo del Barrio marks the popular Latin American holiday with a parade that honors the tradition, as well as Latinos who have made significant contributions to the community. This year, two from the Fordham family were honored: poet and performance artist Maria Aponte, Fordham’s diversity coordinator in the career services office, and filmmaker Andrew J. Padilla, FCLC ’11.

With a history rooted in the Puerto Rican social justice movements of the late 1960s, El Museo is noted for world class exhibitions of Latin American and Caribbean art. The annual parade always features live camels and puppets; it also doesn’t shy away from serious issues.

This year, alongside the live bands and dancers, the group Gays Against Guns carried portraits of those slain in an Orlando nightclub last June. The two Fordham honorees said they use their art to share similar social justice values.

Padilla, who majored in political science, grew up in the area and marched in the parade as a child. Through his award winning film “El BarrioTours” he helped expose the displacement caused by gentrification in the East Harlem neighborhood. Padilla credits political science professors Christina Greer, Ph.D., lecturer Christopher Toulouse, Ph.D., and photography instructor Anibal Pella-Woo with “opening up that space for me through independent projects” that helped his work blossom from a local film into a nationwide project profiling displacement in America.

“Professors can get students to move forward and out into their communities, sometimes through seemingly routine assignments,” he said, noting that homework from Greer required each student to write to their congressperson. “It’s about allowing students to follow up on the things they care about and letting students lead their education.” 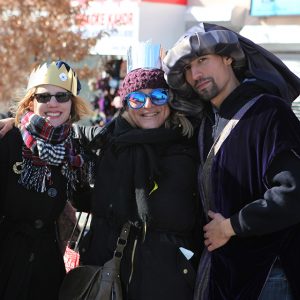 Aponte has been community arts activist for nearly as long as she’s been at Fordham, which has been for 18 years. She received her master’s in Latin American studies from the University and has written and performed in two one woman shows. She’s also the author of a published a book of poetry titled Transitions of a Nuyorican Cinderella (CreateSpace, 2012).

Quick to replace her madrina crown with her career services hat, she said that there are practical reasons for students to be involved in the diverse communities that surround Fordham’s campuses.

“Employers are looking for interpersonal skills of people that are able to connect with other people’s differences and cultures,” she said. “So to be involved in community service organizations outside of the academy gives the students a good balance.”

But with a nod to Padilla and volunteers from the University’s Office of Development and University Relations, she said there is a more significant reason to be involved.

“It’s extremely important that we are connected to the community that Fordham lives in and to be able to demonstrate our mission statement, which is the care of others.”