African-Americans have been freed from slavery for 150 years, but racism inherent in the system that dehumanized them can still be felt today, Annette Gordon-Reed, Ph.D., said in a discussion. 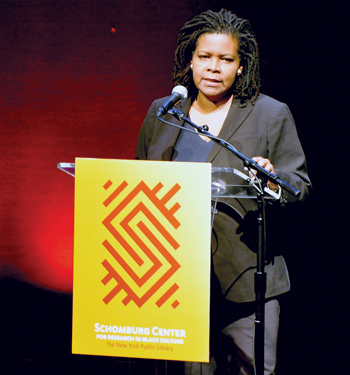 Annette Gordon-Reed spoke about the ways that African Americans’ stories about slavery have been marginalized by historians.
Photo by Patrick Verel

Gordon-Reed, the Charles Warren Professor of American Legal History at Harvard Law School, professor of history at Harvard, and the Carol K. Pforzheimer Professor at the Radcliffe Institute for Advanced Study, spoke at length on Feb. 9 at the Schomburg Center for Research in Black Culture in Manhattan.

Her talk, “Memorializing American Slavery,” was co-sponsored by Fordham’s Department of African and African-American Studies as part of its year-long Emancipation Series celebrating the 150th anniversary of the signing of the Emancipation Proclamation.

For her work, The Hemingses of Monticello: An American Family (W. W. Norton, 2008), Gordon-Reed became the first African American to win a Pulitzer Prize for history.
While researching the book, which details the relationship that Thomas Jefferson had with Sally Hemings, a mixed-race slave who was also his wife’s half-sister, Gordon-Reed found that the stories that were told about Hemings and Jefferson were given more credence when they were told by whites.

“African-American enslaved people were the only people who I think were made to prove beyond a reasonable doubt the things that happened to them in slavery,” she said. “The sympathy always tended to be with the people who were in power, that is to say southern slaveholders, doing things to make their descendents feel less guilty about what went on. That was a huge part of what was going on with the Jefferson-Hemings story.”

The biggest fallacy that Gordon-Reed aimed to dispel was the notion that enslaved African Americans did not value family ties. As an example of how the country’s legal system was stacked against them, she noted that the term that was used for illegitimate children such as Hemings, whose father was a slave master, was filius nullius, or “child of no one.”

“What historians have done is take that legal definition and act as if it were true, as if we can’t possibly know who their fathers were, and therefore Sally Hemings could have had children with anyone,” she said.

Although DNA testing in 1998 and a 2000 report by the Thomas Jefferson Foundation corroborate Gordon-Reed’s conclusion that Madison Hemings was truthful when he said that he and his three siblings were Thomas Jefferson’s children, the suspicion that Hemings’ paternity claim was greeted with, said Gordon-Reed, is indicative of a mistrust of blacks to be truthful.

“People criticize the black family … but it’s outsiders who imposed, from the time of slavery, this notion of the nonexistence of the black family, that the ties weren’t there. That kind of attitude is something that has helped shape the way people view the black [family]and unfortunately the way we see ourselves. Because white supremacy . . . if it’s powerful enough, it affects the way black people view one another. So we have to constantly fight against this, not just on the outside of the community, but in the way we view ourselves,” she said.

“This is an opportunity to show that when African-American people tell you what happened in slavery, that it’s truthful, and you should pay attention to it.”