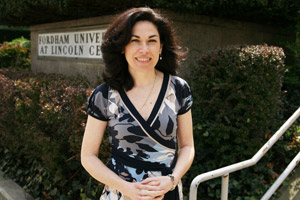 Michelle Terzini-Hollar’s teaching experience in an underfunded school led to her career in counseling.
Photo by Michael Dames

Michelle Terzini-Hollar has taken a long, winding road to reach her goal—a doctoral degree from the school psychology program in the Graduate School of Education (GSE).

Terzini-Hollar began her career at a wealthy school in Glen Ridge, N.J., where she taught French, the language of the country where she and her brother grew up. At the time, her approach to teaching was based more in theory than actual experience.

“I was really interested in what I could bring to the classroom as far as a good pedagogy was concerned,” she said. “I was very interested in how I reached the kids through lesson development; whether I was breaking it down into small-enough pieces; whether I was expanding it enough for them to really build communicative competence.”

But her perspective changed in 1982, when she began teaching at Dickinson High School in Jersey City, N.J. Unlike her previous post, there were many challenges facing educators at Dickinson. In fact, it was featured in Jonathan Kozol’s book Savage Inequalities (Crown, 1991), which focused on grossly underequipped, understaffed and underfunded inner-city schools.

There, she had students coming to her all the time to talk about their problems, but she didn’t feel equipped to deal with them.

Realizing that such questions are best addressed by school psychologists, Terzini-Hollar enrolled in Fordham in 1992 and earned a master’s degree in the psychology of bilingual students.

She began work on her doctoral degree in 1999, but like many people in the New York metropolitan area, the events of 9/11 caused her to temporarily abandon her plans. Her husband’s business was shuttered as a result of the attacks, which wasn’t the last of her worries.

She finished an internship at the Audrey Hepburn Children’s House for physically and emotionally abused children, but then was sidelined herself by severe migraine headaches that, at their peak, plagued her roughly five times a week.

Traditional medicine did not alleviate her pain, but acupuncture did, and she got back on track in 2005.

She recently completed her dissertation on how the children of Korean immigrants in her town of Palisades Park, N.J., deal with stress. Her basic premise is that it’s not the big stresses that affect people as much as the accumulation of little stresses. Noting that she married a man of Korean descent, Terzini-Hollar said she found the immigrant Korean community in her town to be an ideal subject for study.

“I decided that we focus too much on psychopathology, too much on depression and anxiety and all the bad things, and I really wanted to focus on something positive,” she said. “So I decided to look at well-being and to see how people cope who are confronted with these daily hassles, and how the level of acculturation leads to well-being instead of a negative outcome.”

She declined to pick a favorite from among the classes that led to her degree from GSE’s Division of Psychological and Educational Services, which she plans to use to pursue therapies and treatments for adolescents.

“What I enjoyed most about Fordham is that you can challenge the professors and they come back at you with another challenge,” she said. “I found that in many classes.”