skip to main content
Return to Fordham University
You are at:Home»Inside Fordham»Ecumenical Patriarch Receives Honorary Doctorate in Visit to Fordham 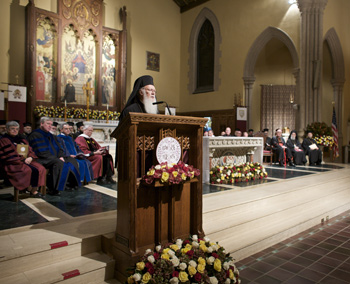 Ecumenical Patriarch Bartholomew accepts his honorary doctorate at the University Church and delivers an address on “Discerning God’s Presence in the World.”
Photo by Jon Roemer

Fordham University conferred an honorary degree upon His All Holiness Bartholomew, Archbishop of Constantinople, New Rome and Ecumenical Patriarch, on Oct. 27 at the Rose Hill campus in the Bronx.

The Ecumenical Patriarch, the 270th successor of the 2,000-year-old Christian Church founded by St. Andrew, received a doctorate of laws,honoris causa, at a ceremony attended by more than 1,000 people in the historic University Church.

“We honor you for the extraordinary service that you have given to the Orthodox Churches, the whole Christian family and the world,” said Joseph M. McShane, S.J., president of Fordham. “Throughout your ministry as the Archbishop of Constantinople, New Rome and Ecumenical Patriarch, and as the successor to the apostle Andrew, you have discharged the duties of your office with vision and holiness. In the model of your saintly predecessor, St. John Chrysotom, you have been a theologian of rare wisdom and wide erudition.”

Ecumenical Patriarch Bartholomew, who has occupied the First Throne of the Orthodox Christian Church since 1991, accepted the honor of being received into the “doctoral college of this esteemed Jesuit school” with sincere gratitude. He then addressed the audience with a speech that touched on “ecumenical consciousness,” or the opening of the heart, opening up to others, and opening to all things created by God.

“The way of the heart stands in opposition to everything that violates peace,” he said. “Unless our actions are founded on love, rather than on fear, they will never overcome fanaticism or fundamentalism.”

Although human conflict may be inevitable, war is not, the Ecumenical Patriarch said.
“If the 21st century will be remembered at all, it may be for those who dedicated themselves to the cause of tolerance and understanding,” he said.

Referring to the nonviolent principles of Mahatma Gandhi and the civil rights activism of Martin Luther King Jr., the Ecumenical Patriarch said the most “provocative message is loving our enemy and doing good to those who hate us.

“Such dialogue draws people of diverse religious beliefs and cultural traditions out of their isolation, instituting a process of mutual respect and meaningful communication,” he added. 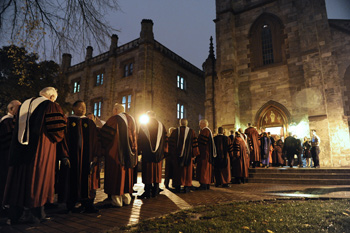 Faculty, trustees and other guests wait outside the University Church for the procession to begin.
Photo by Chris Taggart

One of the Ecumenical Patriarch’s most important causes is environmental awareness, which is why he has become known as the “Green Patriarch.” To that end, he said God’s word should be seen and heard in the “oceans of our planet, in the trees of our continents, and in the animals of our earth.”

Several distinguished guests and members of the clergy attended the ceremony, including Archbishop Demetrios, Primate of the Greek Orthodox Church of America; the Rev. Timothy M. Dolan, Archbishop of New York, and Edward Cardinal Egan, who was appointed the Papal Delegate of Pope Benedict XVI.

“Here at Fordham you see so many who look to you for leadership and inspiration,” Cardinal Egan said in his remarks to the Ecumenical Patriarch. “May your stay with us be a source of encouragement and deeper understanding, and an opportunity for us to say to you—and to all the Orthodox Christian community—what Jesus Christ said to his apostles: ‘We must be one.’”

The Ecumenical Patriarch has worked in close and brotherly association with two Popes, John Paul II and Benedict XVI. A citizen of Turkey and a leader of a Christian minority in a predominantly Muslim nation, Ecumenical Patriarch Bartholomew’s personal experience gives him a unique perspective on the continuing dialogue among the Christian, Islamic and Jewish worlds.

In his speech, he praised Fordham’s Orthodox Christian studies program, the first of its kind at a major university in the United States.

“This program … demonstrates a practical synergistic spirit, modeling for Orthodox and Roman Catholics everywhere a shared common purpose based in truth and in love,” he said.
Earlier in the evening, the Ecumenical Patriarch met with a group of students at a private event held at the William D. Walsh Family Library. There, student leaders presented him with gifts, including a Fordham sweatshirt and baseball cap, as well as a rose developed in his honor. 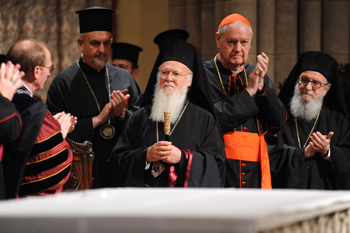 “This newly created rose is a special ‘green’ rose, grown to stay in many harsh climates without the use of any chemical pesticides,” said Anne Neuendorf, a sophomore at Fordham College at Rose Hill and president of the Orthodox Christian Fellowship. “The rose bushes surrounding you are the first Bartholomew roses grown in the world and will be planted on Fordham’s Rose Hill and Lincoln Center campuses in memory of your visit here today.”

Developed by noted horticulturist Robert Neil Rippetoe at the Roses Unlimited lab in Laurens, S.C., the Bartholomew rose will be registered with the American Rose Society.

Student Evangelos Tsevdos, a sophomore at Fordham’s College of Business Administration, said he was very happy to have met the Patriarch.

“It’s a once-in-a-lifetime opportunity. Just his presence here was unbelievable,” he said. “I liked his sense of humor, putting on the Fordham baseball cap that we gave him, for instance. It’s not something you’d expect to see from someone in such an esteemed position. It was amazing.”

Later in the evening, the Ecumenical Patriarch dined with Father McShane and other guests at Tognino Hall in the Duane Library while more than 800 guests enjoyed a reception at the McGinley Center.

“I thought it was a beautiful ceremony,” said Vivienne Papadatos, a resident of New Jersey, who arrived just before the ceremony began and watched from an overflow room at Fordham Preparatory School, where the event was aired live. “He came in to bless those of us in the auditorium, which was such a huge surprise. He is very inspirational.”

The Ecumenical Patriarch landed in the United States on Oct. 17 and traveled to Memphis, Tenn., where he led his Eighth International Environmental Symposium, this time addressing the needs of the Mississippi River. He then arrived in New York City, where 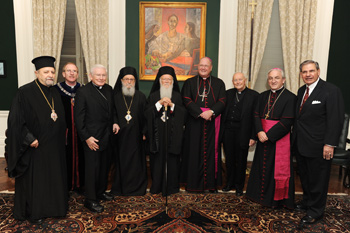 he celebrated several liturgies before the honorary degree ceremony at Fordham.

His visit coincides with the release of a book containing his major addresses and public statements,In the World, Yet Not Of the World: Social and Global Initiatives of Ecumenical Patriarch Bartholomew(Fordham University Press, 2009).