skip to main content
Return to Fordham University
You are at:Home»Inside Fordham»Economist Studies British Women’s Property Rights Act and Finds the Good and the Bad 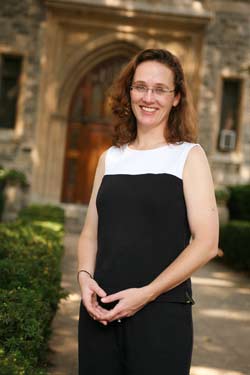 Mary Beth Combs, Ph.D., has done extensive research on the effects of the British Women’s Property Act of 1870.
Photo by Michael Dames

Combs’ interest in this phenomenon led her to England on a trip back in time through 19th-century marriage, death and tax records. The object of her study was the 1870 Married Women’s Property Act that was passed after decades of contentious debate. The act came about during a time in Victorian England when increasing numbers of women were beginning to enter the work force.

Publicly, politicians promoted the act as an effort to help working class wives protect their personal belongings, or “moveable” property, from drunken or disreputable husbands. The act also gave women control over rents from their “immovable,” or real property.

Combs said that the act came to be viewed among historians as a watershed moment for women’s rights, enabling married women to gain a more equal financial footing. But in the 1970s, some scholars began to question that view, arguing that the act had, at best, a minimal affect on women’s lives.

“Yet nobody had actually collected any [economic]data to determine whether women had been affected by this,” she said.

What she discovered was that before the act was passed shopkeepers—typically lower middle class butchers, bakers and brewers—had started using a practice that the aristocracy had employed for centuries: asset sheltering, or the practice of protecting property and other things of value from creditors or debt collectors.

At the time, Combs said there were widespread bankruptcies among shopkeepers.

“The upper classes and the aristocracy had been using the Court of Chancery to put aside property in a woman’s name for years,” she said. “There had been a set of laws for the rich, and a set of laws for the common people. But suddenly, on the eve of bankruptcy, what was happening was that the [middle-class] husbands were squirreling away property for wives [who legally could not own property]in trust as well. When they declared bankruptcy, the property of the wife was protected.”

How did the Married Women’s Property Act tie in?

Besides giving women greater control over their own property, it also made wives liable for debt. Combs argues that the passage of the act had as much to do with controlling fraud committed by married couples as with giving women rights to own and control property.

“I won’t say it’s the smoking gun, but you have an all-male parliament voting to give women property rights. Why?” she asked. “Like many institutions, the act was not all it appeared to be.”

Yet regardless of the complicated set of motivations that led to passage of the act, Combs believes that it did ultimately help decrease women’s legal dependence on their husbands and gave them the opportunity to make choices over where to put their wealth.

Combs found, for example, that women began to use that new-found wealth to acquire more personal property—not jewelry or furniture, but stocks and bonds. Such financial instruments made the transfer of wealth from generation to generation much less risky, Combs said.

“If someone in a bad marriage has no rights to property, they don’t really have much of a bargaining position to threaten to leave,” Combs said.

Combs has made numerous conference presentations on her research and is currently at work on a book.

But the admitted Anglophile, who loves British literature and once spent a semester at the London School of Economics, is pursuing other scholarly projects too: She is working on publishing a study of the work of British economist John Stuart Mill and the influence of his wife Harriet Taylor on his work.

She is also co-editing an anthology of literary works including writings from Geoffrey Chaucer to Maya Angelou, all with an economic theme.

Nevertheless, she sees herself primarily as an economic historian.

“I’m really interested in the relationships between institutions and individuals, and the extent to which they influence each other,” she said.