skip to main content
Return to Fordham University
You are at:Home»Faculty Profiles»Ecologist Looks Below the Surface for Evolutionary Progress

What sparks a lifelong passion for studying fish? A childhood spent in Honolulu is a start. 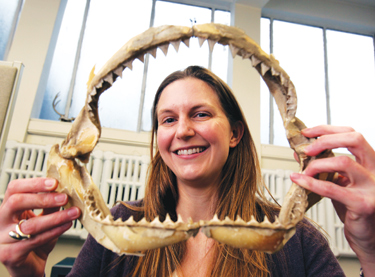 Rose L. Carlson, Ph.D., is an evolutionary ecologist with a focus in ichthyology, the branch of biology that studies fish.
Photo by Bruce Gilbert

“Growing up in Hawaii, I started snorkeling and spending time in the water when I was very small,” said Rose L. Carlson, Ph.D., an assistant professor of evolutionary ecology. “I was able to readily observe fish and got to learn about different species and their ecologies. I saw that there are many interesting things going on in the water.”

Carlson, an ichthyologist (someone who studies fish), focuses on morphology, a branch of biology that examines the physical structures (i.e., shape and size) of organisms. Her area of expertise is the morphological diversity of a group of fish known as darters.

The amount of physical diversity among organisms, and whether they are becoming more or less diverse over time, is an important factor in ecological well-being.

To find out whether darter fish—small fish that live in the slow-moving waters at the bottom of fast-moving rivers—are becoming more or less diverse, Carlson first has to find them. She travels with her students to streams and rivers in the South to collect the darters and bring them back to Fordham. The team examines how mouths and fins of various darter species differ, and then tests the fish to see which structures allow the fish to thrive more.

In addition to working with the fish themselves, Carlson has also done macroevolutionary research. While a graduate student at the University of California at Davis, she and her co-researchers constructed phylogenetic trees—diagrams that depict the evolutionary relationships among species. By collecting molecular data about the specimens and ecological data about their habitats, Carlson and her team could map how the species has changed over millions of years.

“Understanding what’s going on in darters, even though it’s a small group, helps us to understand the evolution of diversity,” Carlson said. “If we can pinpoint the factors that generate diversity, we know what we need to protect in order to maintain that diversity.”

In the world of ichthyology, Carlson has already made significant contributions toward a better understanding of darters. While doing postdoctoral research at Harvard, she joined a team of bioengineers studying what is known as boundary layers within moving water.

In any river or stream, water at the bottom, or substrate, moves more slowly than it does closer to the surface, because it is forced to interact with rocks, mud, and other obstacles. The region between the substrate, where the water’s velocity is lowest, and the free flow of the water, where the velocity is highest, is known as the boundary layer.

For engineers, understanding the boundary layer is important for designing hydrodynamic structures such as bridges, dams, canals, and levees.

But the boundary layer also represents the home of the darters.

“Within the stream, the speed of the water flow is different in different areas. When you alter the substrate [by putting]big rocks and dips in it, you get this nice region of reduced flow,” she said. “To us, that doesn’t make a difference, because we’re big and terrestrial. But if you’re a little fish, those kinds of changes can make a big difference.”

Carlson and her mentor George Lauder, Ph.D., professor of organismic and evolutionary biology at Harvard, examined how darters fared in a variety of boundary layers—some with complex substrates and some with smoother substrates. Their results were published in the Journal of Experimental Biology.

“Engineers had been doing boundary layer calculations to make things more hydrodynamic, but the intersection between ecology and fluid mechanics was somewhat lacking,” she said. “Bringing that realism to the field—and then taking the step of asking what are the consequences for an organism—hadn’t been done before.”

Those consequences can be profound, she said.

“We’ve known how important their substrate is. They’re very habitat-specific,” Carlson said. “We know that darters are very sensitive to changes in flow, so we could use [this knowledge]to improve their habitats.”

Understanding how these factors either accelerate or decelerate the rate of morphological diversification in darters is useful for constructing hypotheses about diversification in other organisms, she said. There is much going on beneath the surface of North American rivers and streams that has a significant impact on the ecosystem.