skip to main content
Return to Fordham University
You are at:Home»Colleges and Schools»Graduate School of Education»Early Education Can Rescue Children from Poverty

When President Obama announced his intention to make early childhood education more accessible, some critics questioned whether it warranted a top spot on the national agenda. 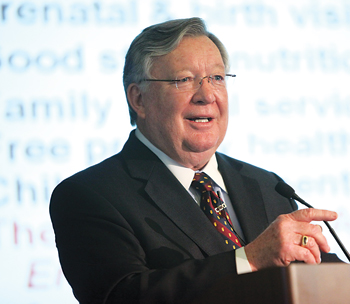 Ramey, who received GSE’s Excellence in Early Childhood Award, presented “The Abecedarian Approach to Early Intervention” to 300 early childhood educators gathered at the Hotel Pennsylvania. He and his research team have studied more than 100,000 children and their families in 40 states and consistently found that receiving a quality education early on has a lasting and dramatic effect.

“If we do it right, we can have a huge influence not only on the development of individual children, but on the functioning of the family as a whole. And these effects are intergenerational,” Ramey said.

Ramey launched the first Abecedarian experiment nearly 40 years ago with 112 children from families living well below the poverty line. The team randomly divided the children into two groups and provided each group with a high-quality nutrition plan, pediatric care, and social work services.

However, while one group underwent the Abecedarian educational approach, the other group did not receive any special educational intervention.

In the Abecedarian group, children received instruction from 7:30 a.m. to 5:30 p.m., five days per week beginning at age six months, using a curriculum that was individualized, comprehensive, language-oriented, and which emphasized interactive reading.

“We didn’t think the results would be this powerful. But these are what I call sledgehammer effects. This is what education does on top of health, nutrition, and social services… [It has] the power to change lives,” he said.

Over the years, Ramey and his team have replicated the experiment and also continued to follow the original 112 children, who today approach age 40. Ramey said that the Abecedarian children:

• have better reading and math skills;

• are more likely to link their educational abilities to effort, rather than luck or teacher favoritism;

• are more likely to be judged by their teachers as socially competent in school;

• are more likely to complete high school, get post-high school education, and

• graduate from a four-year college;

• are more likely to be employed full time;

• are less likely to have been placed in special education programs; and

• are less likely to become pregnant as a teenager, smoke or use drugs, or report that they are depressed.

“If children have a preschool education, they are 400 percent more likely to graduate from college,” he said. “Even those kids from the most challenged circumstances have graduation rates that are higher than the nation’s rates as a whole.”

“We have settled for less than ideal, at times because we think it’s all we can afford. But I reject that notion,” he said. “We know that childhood poverty is something you [pay]for while it happens, and then you pay later for conditions that don’t get ameliorated when the poverty itself doesn’t end.”

Moreover, the educators who are critical to this process must be properly compensated.
“We need to pay the people who provide care and education not just a living wage, but a really good wage,” he said. “You are the people who change lives. You do it one day at a time, which is the way that all brains get changed.”

Co-sponsored by GSE and Los Niños Services, the annual Young Child Expo and Conference aims to provide information to professionals who work with young children.