skip to main content
Return to Fordham University
You are at:Home»Inside Fordham»Donors See Generosity in Action at Scholarship Reception 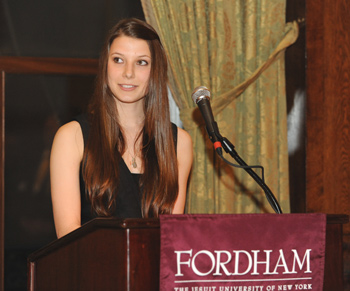 Kasia Laskowski (FCRH ’10) thanks donors for their support of student recipients.
Photo by Chris Taggart

Scholarship donors and the students who benefit from their generosity strengthened their connections on April 26 at the University Club in Manhattan.

The annual Donors and Recipients Reception, which showcases undergraduate and graduate students who altogether receive more than 1,500 privately funded scholarships at Fordham, allowed benefactors to see firsthand the fruits of their dedication to the University.

Kasia Laskowski (FCRH ’10), an O’Herron Scholar and the evening’s featured student speaker, thanked the donors for their support of the student recipients.

“The scholarship funded by Mr. and Mrs. O’Herron has been essential to my undergraduate career because it has afforded me the time to concentrate on my academics, pursue unpaid internships and undertake extracurricular activities rather than seek part-time employment,” she said.

Sarah Schultz (FCLC ’11), an English major and recipient of the Ciancia Family Endowed Scholarship, echoed Laskowski’s sentiment, saying, “I was not going to come to Fordham because I couldn’t afford it, but because of the Ciancia family I can be here. Their generosity is truly amazing.”

As a jazz band played and guests mingled and dined, some donor-recipient pairs met for the first time, while others carried on with established friendships.

“It’s funny how we met,” said Gerold F. L. Klauer (FCRH ’64) about his scholarship recipient, Courtney Kane (FCRH ’12). “She was working at a country club in northwestern Connecticut. I was there playing golf with three of my former classmates from Fordham and she noticed we were wearing Fordham hats.

“To make a long story short, I found out that Courtney was on a scholarship. I had a scholarship program that wasn’t being fully used, so I was able to add to her scholarship,” Klauer said.

“It made a huge difference in what I am able to do, in being able to have opportunities in the summer that I wouldn’t normally have,” Kane said. “It’s a much more comfortable feeling and it definitely brightened my outlook as far as the debt I will have to pay.”

Joseph M. McShane, S.J., president of Fordham, described the evening in terms of baseball, saying that the students come to Fordham filled with hope and filled with talent, able “to hit the ball solidly into the outfield.”

But as they go through their careers, they face challenges, Father McShane continued. Even when the catcher is standing in front of home plate with the ball in his glove, the scholarship donors, coaching from third base, not only wave the students home, helping them face the challenges, but encourage them to leap over and conquer everything that stands in their way.

“Father Dolan probably taught philosophy to tons of people in this room,” Bergman said. “The award I am winning is named after two people who contributed so much to Fordham; I am absolutely honored.”

Members of the Zoller family and their scholarship recipient, Graduate School of Education student Michael Gonzalez, were seated at a nearby table. Judy Zoller (PAR ’85, ’87) explained why the scholarship that her family endowed had a special meaning.

“When my son Joe died unexpectedly, we knew that the thing to do was to establish a scholarship at the Graduate School of Education, because he admired his mother as a teacher and supported education so much,” she said. “Fortunately we have such a wonderful recipient in Michael Gonzalez.”

“I went to Fordham as an undergraduate and am continuing my education at GSE for special education,” Gonzalez said. When asked about his plans, Gonzalez replied, “I’d like to go further into the field of educational psychology. I want parents to be better informed that they have the right to more than a free public education, especially in the case of special education. Everyone needs to know their rights in education.”