skip to main content
Return to Fordham University
You are at:Home»Inside Fordham»Doctoral Student to Pursue Research Career at Nexus Between Social Policy and Education 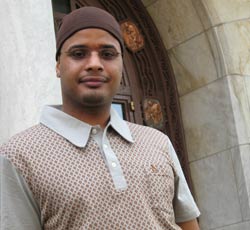 When Ezekiel Dixon-Roman moved from New York to Texas to North Carolina during his teenage years—attending four different high schools along the way—he didn’t realize his travels were planting the seeds for his life’s work.

“I saw a good variation of public schools throughout the country,” said the 28-year-old, who will receive his doctorate in psychometrics from the Graduate School of Arts and Sciences’ Department of Psychology.

Having earned his master’s degree in social sciences from the University of Chicago five years ago, Dixon-Roman was drawn to Fordham to study with Charles Lewis, Ph.D., professor of psychology and director of the psychometrics program at Fordham.

“He’s a very nice and genuine character, outside of his brilliance,” said Dixon-Roman, who decided to attend Fordham based on a chat with Lewis soon after receiving his acceptance letter.

For Dixon-Roman, who approached the data-heavy discipline of psychometrics from a social science perspective, it was important that Fordham allowed him the flexibility to study with an eye toward educational research, not just critical theory.

At its simplest, psychometrics involves the measurement and study of educational testing, he said.

But Dixon-Roman was interested in exploring how the effect of inherited wealth and cultural norms confer an advantage in education.

“How does inequality across multiple generations—when it comes to income and occupations—play a role in education and income inequality?” he wanted to know.

While working on his dissertation, “The Mystery of Inequity: Modeling the Influence of Intergenerational Access on Intellectual Competence,” Dixon-Roman learned there are practices, habits, tastes and ideologies that set social classes apart just as much as wealth does.

Everything from a child’s taste in music, clothes and food can affect his or her social and economic position.

“Any group out of the norm will be stigmatized and marginalized and have a hard time performing,” he said.

Dixon-Roman argues that schools are “the major hegemonic institutions” that determine social structure in advanced capitalist societies, and that radical change is needed.

“For that to happen, minority communities need to engage in supplementary education to support what goes on in the schools,” he said.

Dixon-Roman plans on a career in academia, working and teaching at the intersection of social policy and education, a field he came upon almost by accident.

When he arrived at North Carolina Central University, where he earned his bachelor’s degree in 2000, Dixon-Roman wanted to explore communication studies and research. Being of African-American and Puerto Rican heritage, he was also interested in Latin American studies.

But his college offered neither, so he wound up studying psychology and Spanish, and spent a summer abroad in Cuba to brush up his language skills.

And for Dixon-Roman, a Ph.D. wasn’t the only thing the Poughkeepsie, N.Y., native took away from Fordham. Dixon-Roman met Monica Miller, his wife of just over a year, in a cafeteria at the Rose Hill campus.

Both academics, the couple are now happily ensconced in Chicago, where Dixon-Roman will spend two years in a postdoctoral fellowship at Northwestern University.