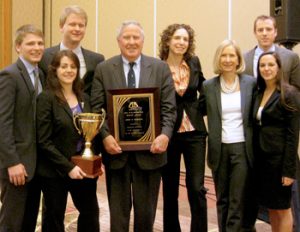 “I am truly amazed at the hard work exhibited by the mediation team this semester,” said Iverson Long, chairman of the Dispute Resolution Society. “This is a tremendous win for Fordham and our ADR Program in the society’s 10th year. I am extremely grateful to Amy, Alana, Saira and all of the students in the society who worked with them to achieve this huge victory.”

In the ABA mediation competition, students act as both lawyers and clients. The lawyer-client teams work toward settlement with the aid of a neutral mediator and are judged by a panel of practitioners. In the first round, the teams worked to resolve a dispute over the use of tribal land. In the next round, they dealt with a complex conflict surrounding the merger of two churches. In the semifinals, they found a solution to quell the concerns of an irate homeowners association. During the finals, they saved their client from a trademark suit.

Dunayevich and Roth reached the national competition after earning first place in the regional competition in March. Also honored during the annual meeting in Denver was former Fordham Law School dean John Feerick (LAW ’61), who received the D’Alemberte-Raven Award for outstanding service in the field of dispute resolution.