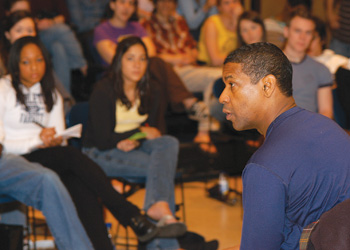 Tony Award-winning actress Phylicia Rashad, best known to TV audiences for her role as Clair Huxtable on the classic sitcom The Cosby Show, has joined the Fordham faculty as the University’s first Denzel Washington Chair in Theatre.

“Show me a successful individual, and I’ll show you someone who has had positive influences in his or her life. The late Bob Stone, my mentor, was a former actor and professor at Fordham University. Bob was one of those influences in my life. He believed in me and gave me something to live up to,” Washington said. “I wanted to create the Denzel Washington Endowed Scholarship and Chair in Theatre at Fordham in order to offer the next generation of students positive influences. Phylicia Rashad, as the inaugural holder of the chair, will provide the care, compassion and that extra push to help take students where they’re meant to go.”

Washington was discovered by Hollywood in 1977, when he was cast in the television film Wilma. But it was his award-winning performance on stage in A Soldier’s Play that captured the attention of the producers of the NBC television series St. Elsewhere, and Washington was soon cast in the hit series as Dr. Phillip Chandler. 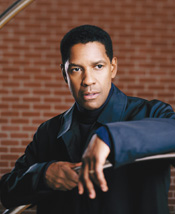 He was born and raised in Mount Vernon, N.Y., the second of three children. Originally a journalism major at Fordham, he was seduced by student drama productions and switched to theatre.Washington’s career includes two Oscar wins (Training Day andGlory) and five Academy Award nominations altogether, among dozens of other awards and honors.

He has acted in more than 40 films, including most recently,Unstoppable, The Book of Eli and the remake of The Taking of Pelham 1 2 3. He has directed (and co-starred in) The Great Debaters and Antwone Fisher.

“The theatre program is deeply honored by Denzel’s support. He’s a model for students in his acting and directing choices, and he has inspired them with his visits to Fordham; besides being a brilliant actor, Denzel is a born teacher. Casting himself as Melvin Tolson, the master teacher he plays in his film The Great Debaters, is perfect type casting,” said Matthew Maguire, professor of theatre and director of the program.

“Phylicia Rashad is also an inspiration. Like Denzel, she is one of our top actors of film and TV who always returns to her roots on stage. Our students are thrilled to learn from this unique artist whose dynamism and powerful authenticity earned her the Tony for Lena Younger in A Raisin in the Sun.” 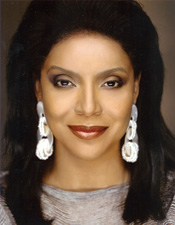 Her Broadway credits include Cat on a Hot Tin Roof, The Wizand A Raisin in the Sun, for which she won a 2004 Tony Award for best actress in a play. She also has appeared in a number of feature films, including Free of Eden (opposite Sydney Poitier),Just Wright (with Queen Latifah) and Frankie & Alice (with Halle Berry).

Washington won a Tony Award in June 2010 for his lead role in the Broadway revival of Fences—his first Tony—but not the first for Fordham alumni: hundreds of Fordham-trained actors have found success on the Great White Way. The honor roll includes Tony-winner Julie White (FCLC ’85) for The Little Dog Laughed; John Benjamin Hickey (FCLC ’85), who won a 2011 Tony Award for his performance as Felix Turner in The Normal Heart; and performers in The Phantom of the Opera, La Cage aux Folles,American Idiot, The Lion King and West Side Story, among many others.

Maguire said the success of Fordham graduates comes from a love of the work.

The first Denzel WashingtonEndowed Scholarship recipient will likely be announced in fall 2012. The scholarship is intended for a minority undergraduate theatre major, and if possible, a graduate from the Mount Vernon, N.Y., school district.

“Fordham is deeply in Denzel Washington’s debt, not only for his generous gifts to the theatre program, but also for his longstanding commitment and public support for the University,” said Roger A. Milici Jr., vice president for development and University relations. “His international reputation and star power will certainly bring greater interest to Fordham programs and greater support for our mission. We are especially grateful and honored to count Denzel Washington as an alumnus and generous benefactor.”