skip to main content
Return to Fordham University
You are at:Home»Inside Fordham»Democratic Super Delegate Credits Faith with Giving Her Strength 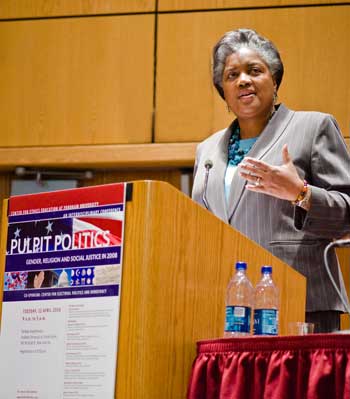 Mixing anecdotes from her childhood in New Orleans with observations about her career in politics, Donna Brazile credited her religious faith with helping her fight some of most storied political battles in the country’s recent history.

The April 22 conference, which was sponsored by the University’s Center for Ethics Education and the Center for Electoral Politics and Democracy, featured panels that addressed subjects such as the use and abuse of religion on the campaign trail and religious views, family values and public discourse.

In her speech, Under God We Trust: Faith and Politics in a Diverse America, Brazile, the first African-American woman to lead a major presidential campaign, admitted that, for liberals and feminists such as her, it can be difficult to address faith. But the fight for gender equality and equality for all Americans demands it, she said, because the Gospel compels people to speak truth to those who are in power.

“I had a great honor last week. I left my class [at Georgetown University]early on Tuesday to go to CNN, because Bill Bennett, a fellow Catholic, was going to give the narrative of the Pope landing at Andrews Air Force Base. As a liberal Catholic, I wanted to have my voice along with Bill Bennett’s voice,” she said to vigorous applause. “That is how strong I believe that my faith, my beliefs, my positions and my values are ones that I will not run from, will not hide from. I have no qualms talking about stem cell research, same-sex marriage or abortion.”

After her speech, Brazile answered questions about the Democratic primary fight between Sens. Barack Obama and Hillary Clinton, but would not reveal who, as a “super delegate,” she would choose. When asked if she felt it was a good idea for Clinton to downplay her gender in her campaign, Brazile said it was borne out of necessity to frame the first viable female candidate as someone who had experience.

“If you look at the history of women candidates, especially women running for executive-style positions, we often have to use our resumes more than we use anything else. Men, I have to tell you, I have seen some empty blue suits in my day. But the women, we almost have to be super-qualified, over-qualified, in order to even be heard. And I think they framed her initially as this experienced candidate.”

The problem, she said, is that this year voters are hungry for change, and Clinton’s experience has practically cast her in the role of the incumbent. And although Brazile noted that sexism is more socially acceptable in this country than racism, Clinton made some strategic errors, too.

“To run a campaign based on this idea that this is your season and not recognize that there’s a different wind blowing, and then run a campaign where you spend all the money on a set date believing you would have secured the nomination by Feb. 5 with no strategy nor resources to compete post Feb. 5, thereby giving your opponent the opportunity to score multiple victories, that was a bad mistake; that’s not misogyny,” she said.

At the urging of moderator Costas Panagopoulos, Ph.D., assistant professor of political science and director of the Center for Electoral Politics, Brazile also spoke about how she became involved in civic affairs. When she was nine years old, she lobbied for a new playground in her neighborhood. It was around this time that she received her first communion, and much to her parent’s chagrin, expressed her desire to become a priest.

“For me, politics and public service have been my home, my way of serving, since the Catholic Church denied me my opportunity. And when I go to my parish on Capitol Hill, especially when Scalia is sitting there, or Clarence Thomas, or some of the senators, I go sit right between them. I wiggle myself through and sit down, because I remember that little girl who wanted to serve,” she said.

“The calling is not just to serve God, but also to serve each other and to give witness and to always, always proclaim the good news to the poor. Because I was one of those kids that needed to hear that good news in order to have faith.”