skip to main content
Return to Fordham University
You are at:Home»Inside Fordham»Faculty Reads»Deixis: The Most Common Unit of Grammar That You Never Heard Of

“I don’t want to sit next to that aunt at Christmas.”

Practically speaking, this statement represents an ill-mannered remark indicating one’s dislike of a particular aunt. Grammatically, the statement offers an example of the linguistic term “deixis.” 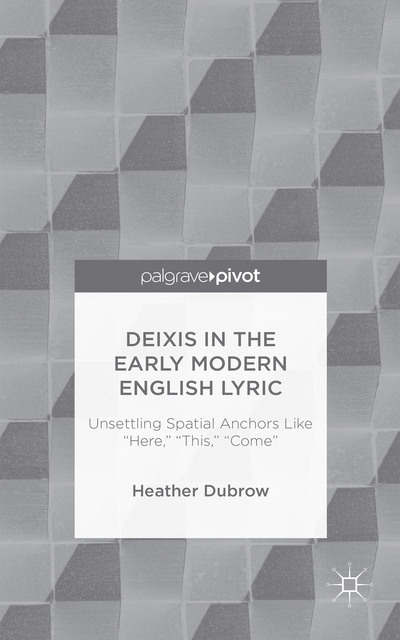 A new book by English Professor Heather Dubrow, PhD, the Rev. John Boyd, SJ Chair in the Poetic Imagination, focuses on deictic, or “pointing” words—for instance, this/that, here/there, come/go, or now/then. These words point to particular people, places, or time, but their meanings depend on the context in which they are used.

“Despite how technical and narrow the term makes it sound, it is really central to many texts and to everyday life,” said Dubrow, who is also the director of Fordham’s Poets Out Loud reading series. “People use deixis all the time whether or not they know the term.”

In Deixis in the Early Modern English Lyric: Unsettling Spatial Anchors Like “Here,” “This,” “Come” (Palgrave Macmillan, 2015), Dubrow examines how 16th- and 17th-century authors such as Donne and Shakespeare used deictic words. In one respect, deixis could help establish binaries—“here” versus “there,” “now” versus “then.” However, deixis could also serve to interrupt those binaries.

“‘Here’ is not only contrasted to ‘there,’ but also may be part of a spectrum that runs from right here, to a little closer, to further away but still relatively close, etc.,” Dubrow said.

Because of this, deictic words had important functions in the texts, she said, such as negotiating “cultural pressures, possibilities, and tensions” within topics ranging from English attitudes to theological debates.

One chapter discusses deixis as it pertains to religion and spirituality. Pointing words can be problematic when talking about a spiritual dimension. One might say that heaven is “here” or “there,” but what is meant by that? Does that mean heaven is a physical location situated in a particular place?

Dubrow’s book is part of Palgrave’s Pivot series, an initiative that quickly disseminates academic research via digital publishing, as well as offering the customary hardcover edition. The series publishes works between 25,000 and 50,000 words—longer than a journal article, but shorter than most full-length books—within three months of a manuscript’s completion, allowing for new research to reach the public as swiftly as possible.