skip to main content
Return to Fordham University
You are at:Home»Inside Fordham»Define Yourself, Charlie Rose Tells Class of 2008 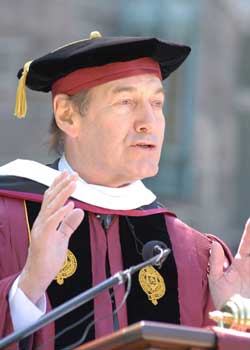 Charlie Rose, upon receiving an honorary doctorate of humane letters, told graduates, “You will leave with a paper in your hand, wisdom in your head and in your heart a passion for learning.”
Photo by Jon Roemer

“You define yourself; don’t dare let anyone else tell you who you are,” award-winning interviewer Charlie Rose told Fordham University’s graduating class. “Promise me and everyone else here that no one will define you, no one will put a ceiling on you because of your race, religion, background, gender or age.”

Rose delivered the keynote address to 4,300 graduates and more than 10,000 family members and friends under crystal blue skies at the University’s 163rd commencement on Saturday, May 17, on the Rose Hill campus.

“At the same time, you must define and connect with your values,” Rose said. “Know what you stand for—the rock-hard place beyond which you don’t go because it will destroy you. Without a personal honor code, you will be without a rudder. With it, you will have an anchor no matter what the temptation.”

Joseph M. McShane, S.J., president of Fordham University, told the jubilant crowd at commencement that the Class of 2008 could be forgiven if they found themselves torn between a desire to light out for the territories and a desire to squeeze in just a little more time at Fordham, given world events over the past four years.

“In the course of your time at Fordham, the world has been whipsawed back and forth by news of developments that have been by turns hilarious and terrifying,” Father McShane said. “The subprime crisis has shaken the financial services industry and sent the stock market reeling. Darfur continues to bleed. Paris Hilton gave youth a bad name. War has dragged on in both Iraq and Afghanistan. Pope John Paul II died and was mourned by millions around the world.” 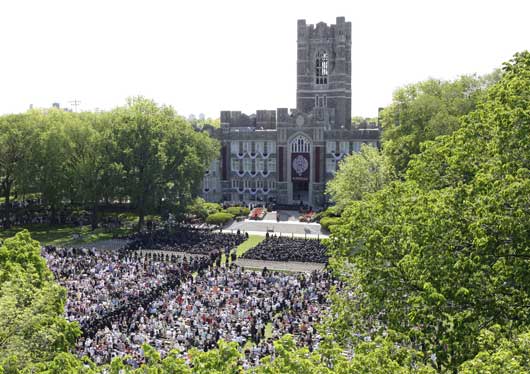 More than 10,000 family members and friends gathered to celebrate the graduation of the Class of 2008 on May 17 at Fordham’s Rose Hill campus in the Bronx.
Photo by Chris Taggart

Rose, one of America’s premier broadcast journalists, referred frequently to wisdom gleaned from guests at the signature roundtable set of the Charlie Rose show, and said he has been lucky to have had the chance to meet so many brilliant, creative people during the show’s 17-year run.

“In all of it, people matter; relationships matter; friends matter,” Rose said. “As impressive as the education that you have received over the years here, it is equally important the friends you have made—close friends that have shared hopes and dreams and fears—those people and those memories serve you.”