skip to main content
Return to Fordham University
You are at:Home»Faculty Profiles»Decrypting Bobby Fischer: Professor Brings to Light the Darker Side of Genius 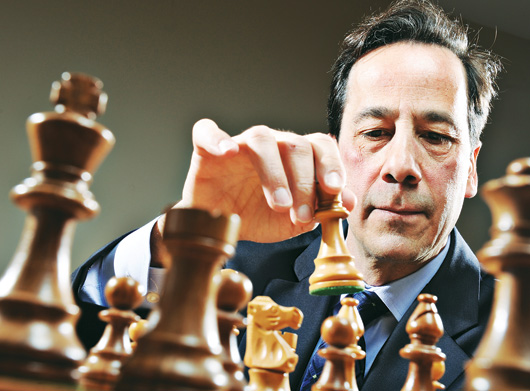 The story of Bobby Fischer has for decades garnered international intrigue.

At 15, Fischer became the youngest chess grandmaster in the world. To Cold War-era Americans, Fischer’s victory in 1958 over the reigning eastern European champions rendered him a national hero, resulting in accolades like “genius” and “boy wonder.” His 1972 capture of the World Championship from Boris Spassky of the USSR is still considered to be the most widely watched chess match in history.

But over time, Fischer’s reclusive and increasingly bizarre behavior alienated him, until his vitriolic anti-Semitism and endorsement of the 9/11 attacks ultimately sank him into infamy. He died an exile in Iceland in 2008.

So, how could one of America’s greatest minds have ended this way?

That is the question Joseph G. Ponterotto, Ph.D., tackles in his groundbreaking book, A Psychobiography of Bobby Fischer: Understanding the Genius, Mystery, and Psychological Decline of a World Chess Champion (Charles C. Thomas, Publisher, Ltd., 2012).

“I wondered, what happened? How did he go awry?” Ponterotto said. “He was a gifted, brilliant prodigy, and I kept thinking that, if he would have gotten counseling and treatment early on, his life could have been very different.”

After Fischer’s death, Ponterotto, professor of counseling psychology in the Graduate School of Education (GSE), coordinator of GSE’s Mental Health Counseling program, and himself an avid chess player, launched a “psychological autopsy” of Fischer—that is, a posthumous psychological evaluation. He interviewed surviving family members, friends, chess masters, journalists, and biographers who knew him.

Between interviews and archives, including a 994-page FBI file on Fischer’s mother, Regina, Ponterotto pieced together how the former grandmaster’s genius degenerated into ostensible madness.

“People know his genius at the chessboard, and they know his bizarre behavior, but they don’t understand why,” he said. “No one really addresses what led to Bobby’s downfall, what led to his giving up on chess, to these symptoms of paranoia and isolation, to the intense anger he felt toward Jews. I uncover those issues to explain that behavior.”

Fischer’s superior intelligence—the root of his celebrity and perhaps his downfall—is aptly explained by his family history. His mother Regina was a polyglot who earned an M.D. and Ph.D. in hematology. Fischer’s putative biological father (the paternity of whom Ponterotto corroborates) was also extraordinarily intelligent.

“Bobby’s biological father, Paul Nemenyi, was a brilliant statistician and engineer. There’s even a theorem named after him,” Ponterotto said. “He had prodigious intellectual gifts, but he also had psychological troubles.”

Nemenyi’s coworkers described him as “an unstable and undesirable person” who exhibited bizarre behaviors, such as an aversion to wool and a proclivity for extreme cleanliness.

According to Ponterotto, it is possible that Fischer inherited not only his father’s genius, but also his maladies.

“There’s hereditary influence,” Ponterotto said. “And there’s [also]some correlation between the neurological functioning in creative genius and in mental illness. It’s not a direct correlation or a cause and effect… but some of the same neurotransmitters are involved.”

His creative genius, coupled with genetic predisposition to mental illness, and the stress of family dysfunction and early fame, meant that when Fischer relinquished chess—his sole source of stability and self-confidence—he was left even more susceptible to the onset of the disease.

Initially, he seemed merely eccentric, making outlandish requests of chess tournament directors to ensure optimal playing conditions. His behavior, however, grew more paranoid. His friends reported that he sometimes lashed out violently. One friend recalled when Fischer had the fillings in his teeth removed for fear the metal might pick up vibrations or even radio transmissions.

“The problem was that he didn’t have balance,” Ponterotto said. “His personal identity was fused with his chess identity. So when he stopped playing competitive chess, he lost that structure and became more vulnerable to possible mental illness.”

Although Ponterotto stresses that, ethically, he cannot formally diagnose Fischer, he can weigh others’ suggested diagnoses against Fischer’s behaviors, family history, and the stressors to which he was exposed.

Based on these factors, Ponterotto believes the evidence is strongest for paranoid personality disorder, a psychiatric condition characterized by unrelenting paranoia and suspicion of others, but is not schizophrenia.

The disorder, though serious, is treatable with psychotherapy.

In his book, Ponterotto considers which services would have benefitted Fischer, and each of his family members. He also examines how prodigious children today might be spared Fischer’s tragic outcome.

“It starts with elementary schools—school counselors, school psychologists, principals, teachers. We need to have systematic, comprehensive programs in place to support [not only]at-risk children, but also gifted and talented children,” he said.

The issue is complex, though. By encouraging prodigies to find balance in their lives, do we risk stifling their particular talents? How do we kindle creative genius without burning out its possessor?

The answers are still uncertain; but at the very least, a deeper understanding of Fischer’s story might help advance the issue.

“There may be an expense that comes with a gift,” Ponterotto said. “[In Fischer’s case,] we let a gifted prodigy fall by the wayside.”

Evidently, he is reaching them: When part of his research was published in Miller-McCune magazine in 2011, the online story drew 18,000 hits within the first few days.

He and a GSE doctoral student, Jason Reynolds, are now examining Fischer’s life from different perspectives in psychology.

“I was able to coalesce… all my skills as a psychologist, a quantitative and qualitative researcher, and a historian into the intense study of one person, which is what I do in clinical therapy,” he said, adding lightheartedly, “It was like my midlife crisis was to do interdisciplinary research and re-engage my lifelong passion for chess.”