skip to main content
Return to Fordham University
You are at:Home»Inside Fordham»Debate Queries Who, or What, Really Controls America 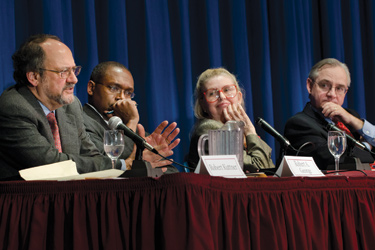 We know about the separate powers of government, the legal underpinnings framed by the Constitution,
and the guiding principles articulated in the Declaration of Independence.

But when it comes to civic life, who, or what, ultimately governs us?

Three public intellectuals took up the question in “What Rules America: Money, Morals or Myth?” a debate on Feb. 1 sponsored by the Center on Religion and Culture.

• For money, Robert Kuttner, former columnist for BusinessWeek, author of The Squandering of America (Knopf, 2007), and co-founder of The American Prospectmagazine;

• For morals, Robert A. George, editorial writer for the New York Post, one-time staffer for the Republican National Committee and U.S. Rep. Newt Gingrich, and regular commentator on political affairs programs; and

• For myth, Susan Jacoby, author of Never Say Die: The Myth and Marketing of the New Old Age (Pantheon, 2011) and The Age of American Unreason (Pantheon, 2008).

In addition to dramatically curtailing political participation, commercialization and materialism impose on every other aspect of the public domain, he said.

“It isn’t just money and politics. It is creeping commercial values everywhere you look. And all of this feeds on itself, because as financial elites become more powerful, they elect people to pass policies to make them even more powerful, and things get more deregulated, more privatized,” he said.

Maybe so, George conceded, as he took the stand to defend the place of morals. National morality—not Judeo-Christian values exclusively, but also the principles on which the nation was founded—affects society as well.

“I think of a specific, overarching and unique American morality, and that is something from the founding document,” George said.

The Declaration of Independence, George said, sets forth several maxims by which Americans check social and political life—including the dictums of equality and unalienable rights to life, liberty, and the pursuit of happiness. Some of the most noteworthy movements in American history were morally motivated, George said, including the Civil Rights movement.

“That principle is still ultimately governing America, because even the wealthiest of individuals will not be able to buy an office if he or she doesn’t at least pay homage to these ideas of divinely inspired equality and respect to the inalienable rights.”

These very sentiments, though, have fed into our national mythology, Jacoby argued.

According to Jacoby, an emotional framework structures American civic life. These sentiments include the myth of meritocracy—that everyone who works hard enough can achieve success—and the myth of American exceptionalism—the idea that America’s unique ideology of liberty, equality, and individualism renders it globally unparalleled.

“The myth of America as a pure meritocracy is to our politics as the myth of lifelong monogamous love is to marriage,” she said. “While we’re all aware in various degrees . . . that these myths are not precise descriptions of reality, we all, in degrees, believe that there is some essential relationship between the myths and the success of what we’re trying to do.”

While we may hope for their truth, several recent studies have challenged these myths, she said. The studies show that in America it is more difficult to rise to a higher economic class than it is in the rest of the developed world.

Deep down, Jacoby said, belief in these myths is becoming as shaky as their actual reality.

<pclass=”body-copy-indented”>“All of the explicit talk about American exceptionalism is [really]atestament to the deep anxiety of Americans that we have lost what we’ve always considered our specialty. When you really believe you’re the best, you’re not obliged to go around puffing out your chest, and shouting ‘I’m No. 1!’”