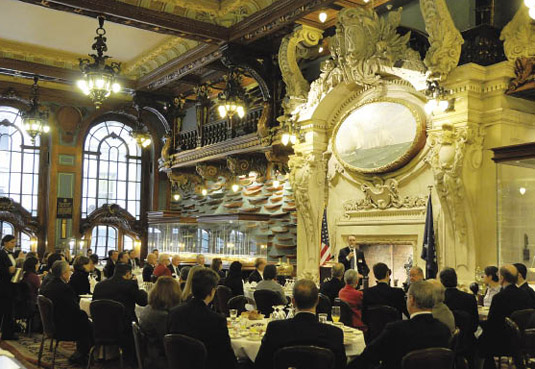 Those were among the high points in Latham’s “State of the College” address given to alumni on Nov. 17 at the New York Yacht Club.

Their average high school grade point average is 3.5; their combined SAT score is about 1250; and 20 percent come from minority groups that are under-represented in higher education.

“As the college continues to raise its academic profile and improve its standing nationally, we are remaining faithful to the vision of the institution,” Latham said.

FCRH students also do well after they graduate. In fact, 83 percent who applied to medical schools gained admission, and 85 percent of applicants were admitted to law school.

“What we continue to do is bring in students with tremendous potential, help them discover their intellectual gifts, help them realize what they’re truly passionate about, and then help them do wonderful things upon graduating,” he said.

He said that undergraduate research opportunities were “frontiers of discovery.” He told the audience that when FCRH began pursuing them in 1996, it did so with $50,000 in alumni donations. This year, the college funded 200 student research projects with a $300,000 budget.

As a result, 23 students co-authored articles in academic journals last year. Latham pointed out six faculty/student pairs who were in attendance, noting that the work they are doing is both advancing their careers and contributing to society.

“Social good is something our students really take to,” he said. “It gives them a different sense of investment in their own education and in what they’re able to accomplish.”

In the sciences, Latham touted the college’s Bronx location, noting that partnerships have been established between FCRH and the New York Botanical Garden, the Wildlife Conservation Society at the Bronx Zoo and the Albert Einstein College of Medicine.

In addition, new areas of interdisciplinary study have been added to the curriculum, such as an environmental science major and a minor in bioinformatics. A program in neuroscience, which will link psychology, biology and computer science, is being developed.

“Most of the crucial scientific problems that we face, after all, do not remain confined within disciplinary walls,” Latham said. “They require us to amalgamate knowledge from several fields.”

Finally, he said that international education is at the core of the college’s Jesuit identity. In addition to increased study-abroad programs, new minors in Mandarin Chinese and Arabic have proven so popular—with 40 students minoring in each field—that it is only a matter of time until they become available as majors.

“Can you imagine a student who is about to graduate with a double major in International Political Economy and Development and Mandarin Chinese? That student is going to be in a pretty good position,” he said. “We’re capable of building those kinds of opportunities for our students.

“The college is doing really well,” he added. “The generosity of our faculty, the accomplishments of our students, and the resources and support of our alumni have allowed us to continue to bring the college forward, to help us become a truly superior liberal arts college that will continue to serve students for years to come,” he said.