skip to main content
Return to Fordham University
You are at:Home»Inside Fordham»Day Remembered as Ordinary Person Who Accomplished the Extraordinary 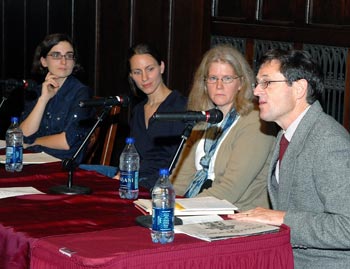 Dorothy Day’s granddaughter, Kate Hennessy (third from left) sits on a panel at The Catholic Worker at 75.
Photo by Bruce Gilbert

The word “saint” is not tossed around carelessly, but on what would have been her 111th birthday, friends, family, historians, writers and followers of Dorothy Day made a case that she should be considered for the honor.

They gave voice to their sentiments at The Catholic Worker at 75: A Celebration and a Retrospective, a symposium on Nov. 8 at Duane Library on the Rose Hill campus.

Organized by the Francis and Ann Curran Center for American Catholic Studies, the event was timed around the 75th anniversary of the newspaper The Catholic Worker, which Day co-founded and which still advocates for poor and displaced workers while focusing on the social justice teachings of the Catholic Church.

Two panels of four participants each discussed the legacy of Day, whose colorful and sometimes turbulent life eventually lead her to full-throated devotion to championing the cause of, and taking care of, the most destitute people in the United States.

The first panel featured Kate Hennessy, one of Day’s two granddaughters, and residents of Day’s “hospitality houses,” of which there are about 280 across the country. Hennessy spoke movingly about how she tried to follow in her grandmother’s footsteps by moving into St. Joseph House on East Third Street in Manhattan.

“At that time, I was very young, in my early 20s, and I had a very difficult time,” she said. “It was scary. It was very hard to be in a soup line, to see people’s anger, to have to deal with someone pulling a knife.”

Now a writer and musician who works with the disabled, Hennessey said her grandmother remains with her to this day, helping her to remember the most important thing anyone can do is to welcome anyone who needs assistance and to not be afraid.

“My favorite quote of my grandmother is, ‘The world will be saved by beauty.’ And it has been, again and again, the push—the hand on my shoulder from her,” she said.

Day’s remarkable openness was a common theme in the participants’ comments, both in her writings and actions. Paul Elie, who wrote about Day in The Life You Save May Be Your Own: An American Pilgrimage (Farrar, Straus and Giroux, 2004) said her autobiography The Long Loneliness (Harper One, 1996) was powerful enough to drive him to volunteer with a hospitality house immediately after he read it.

“She’s an unusually vivid example of a person who has changed lives through her words. There’s a whole movement dedicated to carrying out a model of her life that is embodied, in a large part, by her writings,” he said. “How many writers can we say that about?”

He credited her near obsessive writing in letters and journals, and marveled at the specificity of her entries, from the number of hours it took her to travel by Greyhound from New York to Georgia to join a march for interracial solidarity to the kinds of people she encountered at different hospitality houses around the country.

“Dorothy Day was a journalist in the root sense, of journo, of the daily experience, the holiness of the ordinary, chronicling her daily life,” he said.

Mel Piehl, Ph.D., dean and professor of humanities and history at Christ College, Valparaiso University, and a practicing Lutheran, got laughs from the audience by noting that in the Protestant circles, there was initial suspicion of Day, because like communists, Protestants suspected she was a pawn of the Pope. In some ways, Piehl said, Day had a lot in common with Protestantism’s founder, Martin Luther.

“She was someone who loved the church so passionately that she wanted it to be more fully what it was, to ground itself more profoundly in Christ than its human and institutional and social manifestations might reveal,” he said.