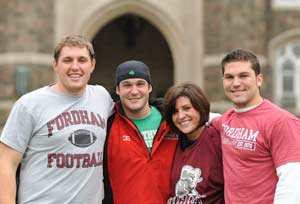 Young alumni came out to celebrate at Homecoming 2008.
Photo by Chris Taggart

Sitting under the tent on Edwards Parade at Homecoming 2008, Philip Lynch (FCRH ’56) reminisced with friends about their days at Fordham.

“I played varsity squash for two years, won two varsity letters, got a nice jacket with a big block F on it… and never won a single match,” Lynch said with a laugh.

He continued, “My friend Bill Crowley said to me, ‘Well, you were in the glee club and you couldn’t sing either, so I guess squash fits with your whole story.’”

The table roared with laughter. Crowley, who was seated with his friends, smiled at the reminiscence.

It was one of many such moments to occur at the University’s annual fall celebration, held on Saturday, Oct. 25. Despite the intermittent showers, Fordham hosted about 5,000 alumni and friends under the Homecoming tent and at Jack Coffey Field.

Although the football team lost 48-13 to rival Lafayette, there was more than enough camaraderie to go around. The convival rumble of the crowd in the tent could be heard across the Rose Hill campus. 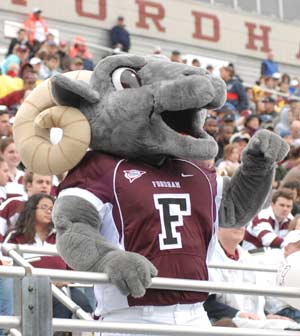 The new Fordham Ram leads the crowd in cheering the football team.
Photo by Chris Taggart

At the game, the University introduced the latest member of its spirit squad—a new Ram mascot. The character, designed to look fiercer and more athletic than its predecessor, took over official cheering duties during a pre-game ceremony.

The old Ram left the field to cheers of thanks from the crowd while a recording of Thanks for the Memories played over the public address system. A few moments later, the new Ram led the team into action.

The costume is the latest step in the University’s continuing efforts to re-brand its athletics department. New logos were unveiled earlier this year and now adorn Fordham merchandise and marketing.

Dancing up and down the sidelines, getting high-fives from cheerleaders and fans, and clowning around with children, the Ram showed no ill effects from the previous evening, which it spent partying with undergraduates at the annual President’s Ball.

“I haven’t been back to campus for eight years, and it looks like a lot has changed,” said Bill Browder (FCRH ’84), who attended the game with his wife and eight-year-old daughter, Elizabeth. “Coffey Field looks great, the stands look great, and I think Elizabeth liked the mascot, so it was a good day all around.”

“He looked furry and clean,” said Elizabeth, who added that the Ram and spirit band that played at the Homecoming tent were her favorite parts of the day.

In addition, Fordham staffers fanned out with digital voice recorders to capture the memories of alumni for a new project called Fordham Stories. The result will be an Internet-based audio archive that will tell the history of Fordham through the voices of those who know it best. The project is slated to go live next summer.