skip to main content
Return to Fordham University
You are at:Home»Inside Fordham»Cuomo Reflects on Past and Issues Challenges for Future 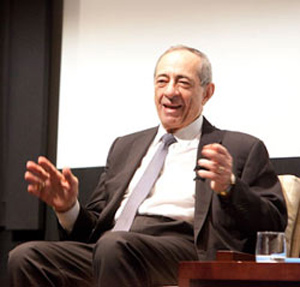 Mario Cuomo says it would have been easy to be a Supreme Court justice, but that the job wasn’t a good fit for him.
Photo by Nancy Adler

Former three-term New York governor Mario Cuomo made an impassioned case for Congress to take back the power to declare war in an appearance on Nov. 20 at the Time Warner Center in Manhattan.

At “A Conversation with Mario Cuomo,” a 90-minute discussion moderated by Thane Rosenbaum, director of the Forum on Law, Culture and Society at Fordham Law, Cuomo addressed a range of topics from his past—from the 1984 Democratic National convention to the U.S. Supreme Court nomination from President Bill Clinton that he turned down.

But it was current events like the wars in Iraq and Afghanistan, the impending trial of alleged September 11 mastermind Khalid Sheikh Mohammed and the conundrum of a potentially nuclear Iran that riveted the packed auditorium.

Cuomo went on to chastise those who say that since war has not been formerly declared by Congress since World War II, that section of the Constitution is no longer relevant.

“Are you suggesting that you can amend the Constitution through constant violation of it? That if you violate it enough, then it no longer counts?” he asked.

“We are now with a president who’s talking about war as though it’s been declared, and it wasn’t, saying, ‘Well, now I have to make a decision. Do I go there or don’t I?’ It allows for some wonderful political possibility.”

If he had President Obama’s ear, Cuomo said, he would make a decision about troop levels, but ultimately give the formal decision to Congress and make them speak on the issue. That, he noted was how the country’s first commander in chief would have preferred it.

“What George Washington said was, ‘Look, I’m a commander in chief.’ The president should be a commander in chief, after you declare a war. Then the president will be in charge and will work with the military. But he shouldn’t be the one who does it because he’s only one person, and he doesn’t speak as much for the whole nation as much as the Congress speaks for the whole nation,” he said.

As for his refusal to accept a nomination to Supreme Court, Cuomo harkened back to his childhood, noting that right after his parents immigrated to the United States from Italy, his older brother died from the flu.

He said he never forgot how the lack of government failed his family then, and it helped inspire him to combat problems like AIDS, homelessness and the crack epidemic that raged during his years in office.

He said that when he was trying to explain to the president his rationale for declining the post, he fell back on a favorite parable:

An Arab in the desert looks down and he sees a sparrow lying on the ground with its claws distended, and he says, ‘What are you doing down there?’ The sparrow says, “They say the skies may fall, and I want to help hold them up.’ And the Arab says, ‘Why, you stupid little sparrow.’ And the sparrow says ‘One does what one can.’