skip to main content
Return to Fordham University
You are at:Home»Faculty Profiles»Culture, Trauma and Migration Intersect in Psychologist’s Research

Moving is stressful even under the best circumstances. 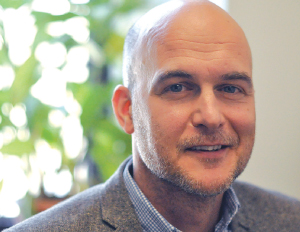 But when you’re uprooted by political violence or a natural disaster, that stress can actually be traumatizing. So it makes some sense to expect that refugees will experience symptoms of post-traumatic stress disorder (PTSD), while voluntary migrants will be dramatically better off.

Except when they aren’t.

Andrew Rasmussen, Ph.D., an associate professor of psychology and director of the master’s program in applied psychological methods, said that despite the more severe experiences that lead refugees to migrate, there is a remarkable overlap in the ways that both voluntary migrants and refugees cope with the stress of relocating. He joined Fordham’s faculty last year after working as a clinical psychologist and supervisor at Bellevue Hospital, where he interacted extensively with both groups.

“We have all sorts of policies that favor people who come over for refugee reasons, and while I believe that refugees are different from other immigrants, I’m less convinced that the differences are as extreme as our policies seem to indicate,” he said. “There are lots of refugees who are coming with an incredible amount of psychological reserves that don’t fit the traumatized refugee stereotype that we see in the news and in some psychological research.”

Consider Somalis who have struggled every day for 17 years in Kenyan refugee camps to make a living in the camps’ black market economies until they can resettle in the United States. While they may suffer from a form of depression, their psychological reserves likely surpass those of someone suffering from severe depression who is not able to get out of bed.

And there are also voluntary migrants who may have very difficult experiences in their backgrounds, said Rasmussen—experiences that can cause them psychological problems here in the United States.

Rasmussen has studied both refugee and immigrant families. In both sets of families, it’s common that children will have been unaffected by the upheaval that drove their parents to leave their home countries. He has observed similar “generation gaps” in both.

“They’ll say they (children) are becoming too American; they don’t have the same cultural values, they’re wearing funny clothes, and they’re not being as respectful to their elders as they should be. Those are things you hear as much among refugees as you hear among voluntary immigrants,” Rasmussen said.

Refugee parents do differ from voluntary immigrant parents, however, when they’ve been personally affected by political violence and show symptoms of post-traumatic stress as a result. Conflicts will happen more often because parents with PTSD are more likely to be irritable and have trouble sleeping.

“The point is there’s not a ‘refugee family syndrome’ that’s specific, but there are elements of the immigration experience that may be affected by a parent who has trauma symptoms,” Rasmussen said.

The Bronx is an ideal place to explore these differences because it is home to many residents from the same country that have come here both as voluntary migrants and as refugees. Rasmussen recently worked with a community group in the Bronx that caters to the Fouta, an African ethnic group found in Guinea and Sierra Leone. He found that one area in which the two migrant populations diverge is after-school childcare.

“There were just one or two places that voluntary migrants will send their kids, whereas refugees wouldn’t send their kids to any after-school program. They’d send them home to be with brothers or cousins or sisters,” he said.

“So it may be that some of the stress related to being a refugee translates into suspicion of government-sponsored care programs in ways that it doesn’t for voluntary migrants.”
Rasmussen also researches how other cultures express distress. Recently he teamed up with Partners in Health, which is setting up a mental health clinic in central Haiti. Through interviews with Haitian residents, Rasmussen was able to design a questionnaire about mental health that was compatible with Haitian culture.

The questionnaire had to be different from one he’d used in the states because depression in Boston, where Partners In Health is based, cannot be compared to depression in rural Haiti—where residents don’t even have running water.

“Even though we may not be able to create a measure for every single person and then try to compare, we do need to understand the importance of recognizing that culture affects the things we talk about, and the way we talk about it.”