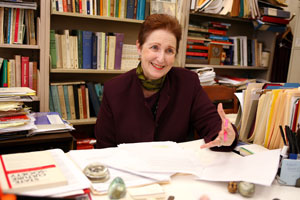 When a colleague approached E. Doyle McCarthy, Ph.D., professor of sociology at Fordham, about collaborating on an article based on conversations with gay men in the early 1990s, McCarthy knew she could call upon her expertise in the sociology of knowledge, culture and emotions to help frame the story. Together, they used the interviews to reveal how the men viewed their identities and relationships in the context of the time. The resulting article, “Gay Moral Discourse: Talking about Identity, Sex and Commitment” (with David E. Woolwine, Ph.D., Hofstra University), received the 2006 Maines Narrative Research Award from the Society of the Study of Symbolic Interaction.

“It took framework to explore the meaning of the men’s lives,” said McCarthy. “People carve out who they are when they talk to others. It’s a process through which identity is shaped, made and remade.”

Symbolic interaction uses qualitative research methods, like the interviews Woolwine conducted, as opposed to statistical evidence, to “get at a group culture and understand the sense people make of their lives,” McCarthy said. “You have to interpret stories as articulations that are both personal and cultural at the same time.”

Published in the April/May 2005 issue of Studies in Symbolic Interaction, the article revealed what the men thought about virtue, commitment and sexual identity in New York City during the height of the AIDS epidemic. Their responses yielded some consistent answers.

One conclusion was that the men interviewed refused to make judgments about the life choices of other gay men. “They wouldn’t impose their own morality on any other person,” said McCarthy. “This kind of morality – never judging others by their own values – is an expression of what was important in a time when [gay men]were being judged by everybody.” This finding, she said, “makes sense, in light of the times, as a moral discourse.”

The other notable discovery was that gay men today would not likely respond to the same questions in the same way. “We think the time affects group morality and its moral discourse,” said McCarthy. “You have to understand what a group says contextually.”

Symbolic interaction—using case studies like these to reveal important sociological truths—has been a vibrant methodology in American sociology dating back to the 1920s. “It generates a lot of interest among students,” said McCarthy. “And it’s becoming more popular as many young sociologists are adopting it.”

The interest of young people in symbolic interaction is exciting to McCarthy, who said the student-teacher relationship is reciprocal. “The wonderful thing about teaching is that it keeps us in tune with whatever we’re exploring in our research,” she said. “The classroom becomes a place where you explore the ideas of your work. Some of my most important ideas have emerged from conversations with students in class.”

McCarthy even uses social theory to understand how she came to be a sociologist, placing her career choices into the context of the time in which they were made. In college in the late 1960s, “We were inclined to get very involved in community and political issues,” she said. “We were interested in social change and politics. [Sociology] was a way to understand the world for the importance of changing it.”

After receiving her bachelor’s degree from Marymount College in 1968, McCarthy went on to earn a master’s degree from the New School University in 1971, and a Ph.D. from Fordham University in 1978. Her dissertation, “George Herbert Mead’s Social Theory of Mind: A Contribution to the Sociology of Knowledge,” revealed an early interest in symbolic interaction. Mead, regarded as one of the founders of social psychology, argued that people’s identities are the products of their societies. One of his students, Herbert Blumer, coined the term “symbolic interactionism.”

In the 1980s, McCarthy turned to the study of emotions, along with a number of other researchers in the fields of sociology, philosophy, psychology and history. Emotions, she said, are not what most of us think they are: private and individual. Instead, “They are something to be explored, in this time, in everyday life. There is something very social about emotions,” she said.

“Emotions are profoundly shaped by culture, language, morality and religion,” McCarthy said. “Most of my work involves a cultural understanding of how emotions are shaped by different societies.”

Using the study of the culture of emotion paired with symbolic interaction, McCarthy is working on a book about the role of emotions in contemporary American culture, in which she hopes to reveal what Americans believe through an examination of today’s emotional cultures in consumer behavior, mass media, sports and other cultural arenas.

McCarthy is also interested in how the child is an emotional object of intense importance in contemporary culture, which is very likely her next research project.

“Why are our children objects of violence and sexuality, along with sentimentality?” McCarthy said. She believes the identities a society assigns to children are “driven by mass media and other aspects of culture.”

In a society where children are frequently victims of sexual exploitation and violence, including the recent Lancaster County, Pa., school shootings, her research is sadly relevant.