skip to main content
Return to Fordham University
You are at:Home»Inside Fordham»Crowley Scholars Tackle Underserved Legal Communities Around the World 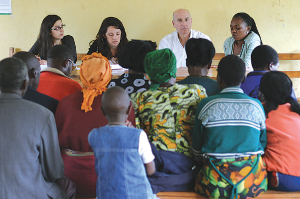 The first week of May is one of final preparations for many Fordham students who are getting ready for summer break or graduation. But for roughly a dozen members of the Fordham Law community, a journey to a far-off land is just beginning.

Members of the Crowley Program in International Human Rights depart this time of year for a two-week fact-finding mission to places such as Malawi, Nepal, Bolivia, and Turkey. The groups are made up of six to eight students, a Crowley Fellow, and three faculty members. Their goal is both simple and daunting: Help advance the cause of protecting human rights.

Last year, the group traveled to Rwanda to research the rights of children with disabilities to receive an education. This year, Crowley Fellow Brian Tronic, a former Peace Corps member, takes a group to Bangladesh to research how well that country’s justice system treats the Lesbian, Gay, Bisexual, and Transgender (LGBT) community.

Where Crowley scholars travel to and what issue they tackle is influenced a great deal by that year’s fellow. Tronic, for instance, previously worked with a transgender community in India.
“The LGBT community in Bangladesh hasn’t received the same support from the international community as in India. It’s a community that really needed some attention and support and wanted to collaborate,” he said.

The plan is to spend the first week doing interviews in the outlying areas, and then in Dhaka, the country’s capital. Elisabeth Wickeri, executive director of the Leitner Center for International Law and Justice, where the Crowley Program is based, and herself a former Crowley Fellow who worked in Nepal, said this order structure of the visit is important.
“It’s useful to ask a question in the capital city, get an answer, and then say, ‘But we heard from people in this other city that that’s not the case, that it’s not as easy as you are saying it is, or the law is not applied in that way,’” she said.

“In a lot of these countries where we’ve done these projects, it’s a very different experience living in the capital city versus living outside of that context.”

Aminta Ossom, the Crowley Fellow who led last year’s trip to Rwanda, previously helped Amnesty International write legal guides to help Sierra Leone residents prosecute war crimes. Since many survivors of that country’s civil war are amputees, conversations with them tuned Ossom on to the topic of disability rights.

She was most impressed with the scope of the work her team was able to accomplish on the trip. In the past, when she worked alone, she was able to interview 30 people over a couple of weeks; in Rwanda, her team interviewed 200 people in just two weeks. Documentation of a problem is of paramount importance to local nongovernmental organizations (NGOs) that the Crowley Program partners with, so the reports that students create from the interviews are very valuable because they provide a baseline from which NGOs can work.

“I was also surprised at how much I learned from the students,” Ossom said. “I had always thought of it as a process where you’re a supervisor for a number of students and a mentor to them, and you’re sharing your experience with them and your academic curiosities with them, but I really feel like I learned to question things a lot more, and think in a more creative way.”
That fieldwork is the culmination of a two-year academic program focused on human rights theory, practice, and advocacy. Matt Solomon, who joined Ossom in Rwanda, already had some experience in thematic research, international fact finding, and developing an advocacy program when he started, but he wanted fieldwork experience.

“What started out as desk-based research in New York ended up with a real measurable impact on the ground,” he said. 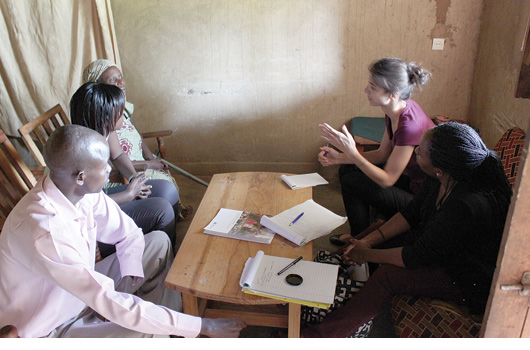 What really distinguishes the Crowley Program is its long-term commitment to issues. Follow-up visits are common, and although that usually entails returning to the country where interviews were conducted, the experience of student David James Harvey illustrates how complicated it can be to make a difference.

Harvey also went to Rwanda, and he found that laws pertaining to the rights of people with disabilities were interpreted very differently in remote villages in the countryside. Mainstreaming children with disabilities into schools with other children may be a worthy goal, he said, but many disabled children were only being educated in small, privately run centers staffed by either a parent or a neighbor who was passionate about educating them. Consequently, such students aren’t even tracked by the government.

“So I have done some follow-up work here in the States to point out to organizations working internationally that maybe Rwanda is not the place where mainstreaming will work. Maybe we need to support these centers and make sure they don’t fall into . . . where we don’t monitor them, don’t have inspections, and they end up being really terrible places.”

For Tronic, working in rural Kenya for the Peace Corps, where children would bike 10 miles for water, forever shifted his perspective toward working for the developing world. He still sends money to help some Kenyans attend school.

“I want to wake up on a daily basis to a job that energizes me,” he said. “When I talk to people about my job, I get excited—and that tells me I’m on the right track.”