skip to main content
Return to Fordham University
You are at:Home»Faculty Profiles»Crossing Cultures for Kids with Special Needs

In her forthcoming book, Chun Zhang, Ph.D., writes that as students in U.S. public schools have become more ethnically and linguistically diverse, the demographics of teachers have remained relatively the same—more than 85 percent white. 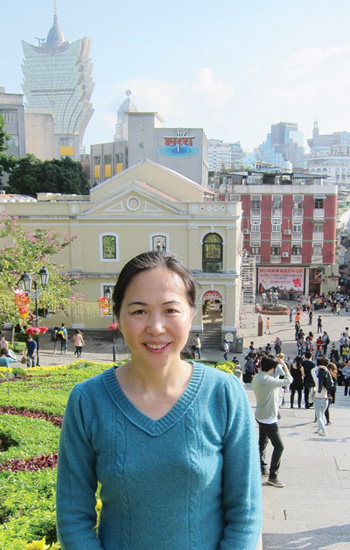 Chun Zhang, Ph.D., currently in Macao on a Fulbright scholarship, researches the impact of culture and diversity on early childhood education.
Contributed photo

Zhang, a professor of curriculum and education at the Graduate School of Education, said cultural misunderstandings can effect a child’s education very early on, particularly those with special needs.

Through her research, Zhang attempts to understand the cultural and linguistic issues in providing early intervention and early childhood special education services. The book, which she co-edits with Carlos R. McCray, Ph.D. and Su-Je Cho, Ph.D, is called Using Positive Behavioral Supports for Promoting School Success from Early Childhood to High School for Culturally and Linguistically Diverse Students: Practice and Policies (Peter Lang, May 2013).

Compounded by language issues, Zhang said that American teachers lacking knowledge about the communities they serve often misdiagnose children as having learning disabilities and/or emotional disturbance, when the behavior in question actually springs from a cultural misunderstanding. Educators need to learn to become cultural translators or brokers in helping bridge the differences and gaps, she said.
Zhang seeks to bridge that gap between a family’s culture and the professional relationship with teachers. Various cultural differences often require distinct approaches. For example, understanding familismo, a Latino custom to involve extended family members in decision-making, should prompt teachers to reach out to grandparents, aunts, and uncles in addition to the parents.

Zhang has been weaving multicultural competencies into her research and teacher training that prepare early educators to address school readiness and challenging behaviors. She has secured funding from the U.S. Department of Education to address a chronic shortage of qualified early childhood special education teachers (ESCE). The funding will provide some 75 teachers with skills to identify students in need and intervene (or, perhaps more importantly, not to misdiagnose and mis-serve) on behalf of those children at risk (i.e., culturally diverse students, students in poverty).

The consequence of not having properly trained ESCE teachers, writes Zhang, is an underrepresentation of children in early intervention and an overrepresentation in special education, with lower expectations and outcomes for children with disabilities, especially for those from diverse backgrounds.

Zhang’s work in China expands on research that she began in the early 2000s and builds on her more recent U.S. research. She will be presenting a comparison of U.S. and Chinese perspectives on special education at the 8th Annual Conference of the Asian Studies Association of Hong Kong in early March.

In Macao, she is studying the implementation of groundbreaking programs in China. The country is just beginning to design inclusive services for young children with disabilities. Zhang and other scholars are exploring how U.S. methods might be implemented; once again, cultural differences come into focus, as the Chinese definition of disabilities differs greatly from that of the West.

Compounding the problem, many Chinese families view a child with a disability as a source of shame—a notion that the Chinese government is trying to abate. Zhang said that Chinese celebrities have begun following the government agenda in order to push the issue to the forefront. But while certain laws are in place to provide the children with services, there’s little money behind them to give the laws teeth.

“It is mostly privately organized,” she said.

While Zhang and other scholars point to the various methods that have worked in the United States, she is careful to point out that that there are many things that haven’t worked. In particular she cites the layers of bureaucracy required to overly assess and monitor teachers and children—a cumbersome component that drains resources from developing and implementing new effective practices and programs.

Whether in the Bronx or Hong Kong, Zhang said she would like to see children with disabilities integrated into classes with the general population. She argues that it’s not just helpful to children with special needs, but it also teaches the rest of the children something more important than just the ABCs.

“Other children will learn so much from understanding and supporting kids who have special needs,” she said. “It’s a kind of soft character development. They become more nurturing and sensitive, [and]if they’re not in that kind of environment they don’t learn it.”

Indeed Zhang, who didn’t start her career researching special education, said the work has transformed her into “a more thoughtful and companionate person.”

“I read the issues, did the research, had contact with the families, and shared these issues and research with my students” she said. “I’ve probably become a better parent, educator, and person because of it.”