skip to main content
Return to Fordham University
You are at:Home»Inside Fordham»Crocodile Discovered by Fordham Biologist

A Fordham professor has published evidence that shatters the long-held belief that the Nile crocodile (Crocodylus niloticus) found throughout Africa is a single species. 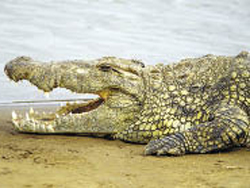 The Nile crocodile has been discovered to
encompass two different species.

Hekkala and her team collected contemporary crocodile samples from throughout Africa as well as from museum specimens, including some from Thebes, Egypt, that are housed in the Museé National d’Histoire Naturelle (MNHN) in Paris.

Although the modern Nile crocodile (C. niloticus) is found throughout Africa, there have been reports that it is larger and more aggressive in the Eastern and Southern Africa and smaller and more docile in the Congo and Western Africa.

The reason, Hekkala’s research suggests, is because the Eastern and Western crocodiles are different crocodile lineages, which shared the Nile River as recently as 100 years ago.

Hekkala’s analysis showed that several of the MNHN mummy samples, collected during Napoleon’s expedition to Egypt in the early 1800s and estimated to be up to 2,000 years old, belong to a species once described as Crocodylus suchus.

Although the cryptic C. suchus lineage had been recognized and described (as the smaller and gentler “sacred” crocodile) by the scientist Geoffroy Saint-Hilaire in 1807, his contemporaries discounted his theory of a separate species. Among scientists, the taxonomic status of the Nile crocodile has been disputed ever since.

The team analyzed DNA from eight crocodile mummies from the same collections as the specimen corresponding to Saint-Hilaire’s description of C. suchus.

“Saint-Hilaire was very prescient in understanding the very detailed behavioral ecological differences between these two species,” Hekkala said. “But the scientific community called him crazy, andCrocodylus suchus was never recognized. We hope to change that.”

Although the Nile crocodile was once worshipped in ancient Egypt, today it sits on the International Union for Conservation of Nature (IUCN) red list as a “species of least concern.” Because of the value of its skins, some governments allow it to be hunted under sustainable-use-based management policies and programs.

But with the discovery that two distinct species are being hunted, Hekkala said that any new conservation agreements producing sustainable harvesting of the Nile crocodile should be re-evaluated. In their paper, Hekkala and her team call for the new C. Suchus lineage to be recognized, and for the IUCN to review its status.

“Our research showed that the habitat range of C. Suchus has seriously declined since the turn of the century,” Hekkala said. “Without recognition of this second cryptic species and proper management of it, we may lose it altogether.”

The findings were published on Sept. 9 in an article in Molecular Ecology. Hekkala’s co-collaborators included scientists from the University of Florida, the Sackler Institute for Comparative Genomics at the American Museum of Natural History, the San Diego Zoo, Tulane University and the Wildlife Conservation Society.