skip to main content
Return to Fordham University
You are at:Home»Inside Fordham»CRC Lecture Warns of Apocalypse… as a Common American Motif

So why this fixation, and how does it influence social, moral, and political thought?

Experts on the apocalypse gathered on Sept. 12 at the Lincoln Center campus to dissect the apocalyptic imagination in sacred and secular American culture. Sponsored by the Fordham Center on Religion and Culture (CRC), the event, “Apocalypse Now: America’s Fascination with Doomsday and Why it Matters,” filled McNally Amphitheatre.

• Elaine Pagels, Ph.D., the Harrington Spear Paine Professor of Religion at Princeton University and author of Revelations: Visions, Prophecy and Politics in the Book of Revelation (Penguin Group, 2012).

Apocalyptic scenarios are not new to American discourse, panelists said. Rather, talk of doomsday has pervaded history since the time that prophets could put pen to paper.

Pagels, a renowned biblical scholar, summarized the story of the “mother of all apocalypses,” the Book of Revelation—the final book in the New Testament, authored by St. John the Divine.

St. John writes that one day, after hearing a loud voice inviting him to enter a mysterious door, he ascends to heaven and glimpses the throne of God. There, he sees the four horsemen of the apocalypse, destined to bring wild beasts, war, famine, plague, and ultimately death to humanity.

Disturbing visions follow: angels bring the wrath of God to earth, a seven-headed dragon emerges from the sea followed by a beast, and, ultimately, Jesus Christ comes forth to destroy the evil forces, chain the beasts, and judge the righteous and the damned.

The book, Pagels said, is more than simply a prediction of the end.

“This is wartime literature,” she said. “It was written right after the Jewish war against Rome. John is writing in Ephesus (an island off of modern-day Greece), where the world is being ruled not by God, but by Roman emperors.

“It’s at this point that John says he wrote this massive religious and political polemic against the enemy of his people, who had destroyed the Jewish people and their capital, Jerusalem.”

With St. John setting the model, religious and political leaders have continued to use the apocalypse as political propaganda, including everything from a cartoon of Abraham Lincoln wrapped up by a “Union” snake, to Dr. Seuss’s cartoon portrayal of Hitler as the great beast in Revelation.

Delbanco likewise pointed out that apocalyptic language has appeared frequently throughout American history, including Martin Luther King Jr.’s image of ascending to the mountaintop to catch a glimpse of the Promised Land—an apocalyptic vision similar to St. John’s ascent to heaven. Such tropes come from religious and secular leaders alike.

Hoberman said the apocalyptic imagination thrived in popular culture, notably in films. From Apocalypse Now to Pearl Harbor and even Godzilla, films have depicted catastrophe in an array of scenarios.

“Movies thrive on disaster,” he said. “The experience of living through cataclysms in movies is not only entertaining, but can provide a form of mastery, a thrill, and also some education.”

In a strange twist, he said, disaster movies can offer hope.

“It’s evident in the movies that have happy endings,” he said. “In these movies, people save themselves by their own mastery. Religion doesn’t really enter in. People turn out to be self-sufficient… They have a positive message that people can believe in themselves.” 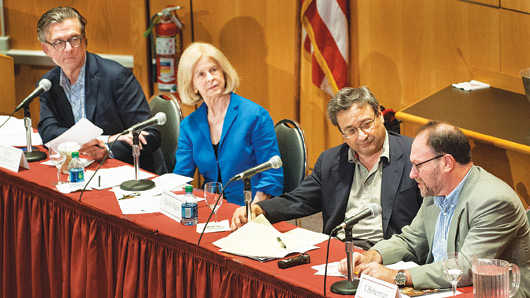