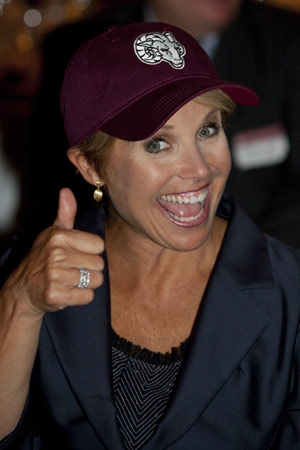 CBS Evening News anchor Katie Couric has sat with presidents, prime ministers, Oscar winners and national heroes during her 30-year career in broadcasting, and is the first female weekday nightly news anchor in the nation’s history.

Yet her greatest accomplishment, she told Fordham alumni on Sept. 17, has been her work to help detect, diagnose and eradicate the disease that claimed the life of her husband, Jay Monahan, in 1998: colon cancer.

Accepting the Brien McMahon Award for Public Service from the Fordham University Club, Couric told the gathering of more than 100 Fordham D.C.-based alumni how her life changed suddenly on April 12, 1997, when Monahan—a healthy, active 41-year-old lawyer and legal commentator for MSNBC—was diagnosed with metastatic colon cancer.

Couric, then co-anchor of NBC’s Today Show and mother of two young girls, recalled the excruciatingly painful months where she had to put on a “happy morning show front” and maintain a sense of family normalcy while desperately looking for “some kind of magic bullet that would make Jay well.”

“[The] Lancet, Oncology Today, andScience replaced Time, Newsweek andVogue,” the celebrity anchor recalled. “I called biotech firms, pharmaceutical companies, hospitals in Israel that were developing a new monoclonal antibody . . . I was throwing around terms like anti-angiogenesis and nondifferentiated cells like there was no tomorrow.

“And there was no tomorrow,” she added.

Following Monahan’s death in 1998, Couric had a colonoscopy on national television to help demystify the procedure, and began aggressively raising funds for research. In March 2000, she launched the National Colorectal Cancer Research Alliance.

In 2004, she helped establish the Jay Monahan Center for Gastrointestinal Health at New York Presbyterian/Weill Cornell Medical Center in New York City after her sister, Emily, died of pancreatic cancer. And in September 2008, she helped organize Stand Up 2 Cancer, which has raised $73.6 million in grants to fund critical and promising research.

Couric shared results of a recent study by the University of Michigan that showed that colonoscopies have increased 20 percent since she began promoting the procedure.

If discovered early, colorectal cancer is one of the most treatable of cancers, with a survival rate of 93 percent. It is diagnosed equally among men and women and 80 percent of those diagnosed have no family history of the disease, Couric said.

“Colon cancer isn’t exactly the stuff of cocktail party conversation,” she said. “But I’m hoping that we’re getting over that because I don’t want anyone to die of embarrassment.”