skip to main content
Return to Fordham University
You are at:Home»Faculty Profiles»Cosmochemist Adds Critical Link to Meteorite’s Chain of Discovery

Before this spring, Sutter’s Mill, a sawmill in Coloma, Calif., was known primarily for its prominenceduring the 19th-century gold rush. 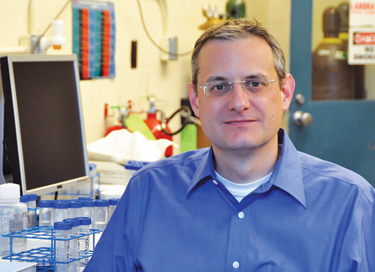 Jon Friedrich, Ph.D., was part of a team of scientists who analyzed the Sutter’s Mill meteorite.
Photo by Janet Sassi

But when a string of meteorites made their presence known on April 22, 2012 via a sonic boom and a fireball streaking across the sky, scientists and residents rapidly enjoined in a new hunt.

After a lengthy search, 77 meteorites were collected, including three recovered within two days of impact. Weighing in at 943 grams, or a little over two pounds, the findings were an impressive collection.

The question then became: What are they made of? For the answer, researchers at the SETI Institute and NASA Ames Research Center turned to a bevy of scientists across the globe.

Under the guidance of Jon Friedrich, Ph.D., associate professor of chemistry, Fordham’s chemistry lab confirmed that the meteorites are a carbonaceous chondrite of the CM chemical class, a rare type of meteorite that contains amino acids.

Friedrich, a cosmochemist who heads Fordham’s spectrometry laboratory, said his team was also able to tell that the Sutter’s Mill chondrite did not experience heating to greater than about 400 to 500 degrees Celsius; that is further evidence for the primitive nature of the material.

“We analyze meteorites in my lab all the time, but when it comes to special stuff, where we see it fall, it’s probably every couple years or so,” he said.

What was notable about the Sutter’s Mill project, the findings of which were published in the December issue of Science magazine, was the speed in which it was completed. Because the meteorites were located so quickly (within a day or two of their arrival), they were untainted by their surroundings on Earth. So the researchers involved likewise hastened their pace to analyze them.

Friedrich, for instance, said he completed his analysis of a sample in two days instead of the normal full week.

“This was a good example of what scientists can do quickly and accurately when they have an interesting sample come around,” he said.

“A lot of meteorites fall in the desert and sit there for a 1,000 years. Over time, being on the earth changes them, so it limits what we can really tell about them,” he said.

The Sutter’s Mill meteorite fragments were also collected just before a rainstorm might have altered their pristine condition.

“It is exciting that it didn’t take long.”

With 70 authors credited in the paper, titled “Radar-Enabled Recovery of the Sutter’s Mill Meteorite, a Carbonaceous Chondrite Regolith Breccia,” Friedrich noted that it also illustrates the interdisciplinary nature of science today.

“Every single person on the paper had a specific role and specific expertise,” he said. “Small pieces of the puzzle were done by all these different people.”

In addition to the way the Sutter’s Mill meteorite was discovered and analyzed, the questions about its origins also make it unique, Friedrich said.

“This meteorite seems to look a lot like it originates within the orbit of some comets. That is exciting because we’re pretty sure that we know, just from their orbits, that most meteorites come from asteroids,” he said.

“So this could be a piece that maybe came from a comet, as opposed to just being from a meteorite. [The compositional differences] are exciting because they tell us more about the origin of our solar system.”