The Lowenstein Center’s 12th floor was officially christened the E. Gerald Corrigan Conference Center in a ceremony held on Oct. 17.

The ceremony, which was postponed from last year due to Hurricane Sandy, honored
E. Gerald Corrigan, Ph.D., GSAS ’65, ’71.

Corrigan, a former president of the Federal Reserve Bank of New York, and a managing director of Goldman Sachs, was honored at a dinner attended by Joseph M. McShane, S.J., president of Fordham; Stephen Freedman, Ph.D., provost; Msgr. Joseph G. Quinn, vice president for mission and ministry; David Gautschi, Ph.D., dean of the Graduate School of Business Administration; and Nancy Busch, Ph.D., dean of the Graduate School of Arts and Sciences.

Also in attendance were recipients of the endowed scholarship fund that Corrigan established in 1999 and which has provided financial support to undergraduate students for nearly a decade.

Corrigan has served on the Fordham University Board of Trustees and has been a mentor and educator to Fordham students. In 2007, he made a $5 million gift that funded the E. Gerald Corrigan Chair in International Business and Finance in the Schools of Business, and he continues to generously support university initiatives. 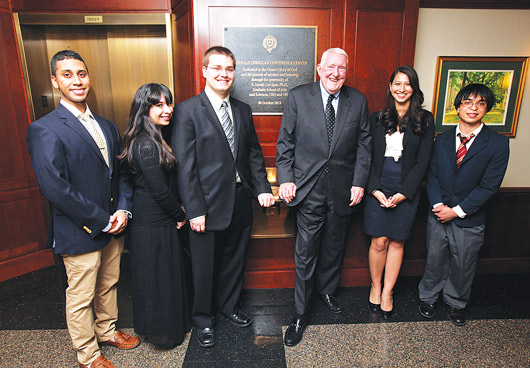