skip to main content
Return to Fordham University
You are at:Home»Faculty Profiles»Corporate Law Professor Moves with the Speed of Business 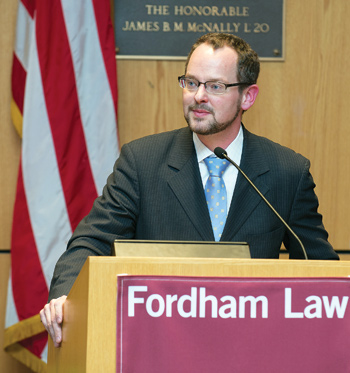 Sean J. Griffith, who has been the director of the Fordham Corporate Law Center since 2008, says there are great opportunities for lawyers who work in corporate compliance.
Photo by Ben Asen

When British bank HSBC admitted in December that it had illegally laundered $881 million for two drug cartels, the $1.2 billion it forfeited under a settlement with the U.S. government drew a lot of attention.

But for Sean J. Griffith, another facet of the settlement was equally interesting: an agreement to hire a compliance monitor.

Griffith, the T.J. Maloney Chair in Business Law, has recently added corporate compliance to his research agenda of mergers and acquisitions and international financial regulation.

As director of the Fordham Corporate Law Center, Griffith is also spearheading the summer launch of a three-week institute on compliance, and is involved in a new Master of Laws program in compliance, to be launched in the fall.

That’s because in the wake of the 2008 financial crisis, the willingness of government prosecutors and regulators to bring enforcement actions against financial institutions has made corporate compliance departments almost as important as boards of directors.

“We’re looking for a growth industry for our graduates, a way we can roll graduates out ready to practice law in the future, and compliance is one of those ways,” he said.

An example of his research on mergers and acquisitions can be found in, “The Market for Preclusion in Merger Litigation,” which he co-wrote with Alexandra D. Lahav, professor of law at the University of Connecticut School of Law.

The paper, forthcoming in the Vanderbilt Law Review, advocates “horizontal comity” among judges in mergers and acquisitions cases. The issue arises when a company is incorporated in Delaware but has its principal place of business elsewhere, like New York. As such, shareholders have the option of suing in those different jurisdictions or in federal court if they want to challenge a transaction as unfair or otherwise disadvantageous to their interests.

When shareholders in New York, for example, reach a settlement with a corporation, that settlement will also apply to shareholders who might have brought suit in another jurisdiction. The substance of the law they’re beholden to is the same in all jurisdictions, but procedural rules, such as whether a case is decided by a jury or a judge, differ. Plaintiffs may prefer the rules of one forum because they feel these rules give them more control over the litigation.

Griffith argues that judges in all the affected jurisdictions should discuss among themselves to oversee how and where the settlement is reached.

“You have a market mechanism. It’s not perfect, and it’s a mechanism with plenty of flaws, but the defendant can buy a settlement from three or more different sets of plaintiffs’ lawyers, and potentially drive down the price of the settlement,” he said.

“If judges are overseeing that mechanism in some way, we don’t have to worry so much about a race to the bottom.”

The effects of the 2008 financial crisis also reverberate in his research. “Governing Systemic Risk: Towards a Governance Structure for Derivatives Clearinghouses,” a paper published in the Emory Law Journal, addresses the development of clearinghouses for over-the-counter derivatives.

Over-the-counter derivatives have been blamed for creating the systemic risk that felled financial giants like Lehman Brothers and Bear Stearns in 2008, so the Dodd–Frank Wall Street Reform and Consumer Protection Act of 2010 mandated the creation of clearinghouses to monitor and collect collateral from all the parties involved in derivatives trades. That way, if one party goes bankrupt and defaults on its obligations, it doesn’t take down the rest of the system.

But banks and financial institutions have been pushing back against stricter regulations.
For Griffith, the question is, what kind of corporate governance does a government-regulated clearinghouse like this require? And just as important, how is it going to assess risk differently than did the banks that failed so spectacularly?

“People who want to explain the financial crisis as a governance problem often point to the financial incentives of the management and key people inside the banks. Extra risks mean extra compensation for them,” he said.

“Because the clearinghouse is a public/private entity, it’s performing a public function and shouldn’t be governed in a purely private way.

“A dual-board structure, consisting of management and supervisory boards, like those found in many European companies, may be the best option.”