skip to main content
Return to Fordham University
You are at:Home»Faculty Profiles»Conservation Geneticist Uncovers Secrets of the Past 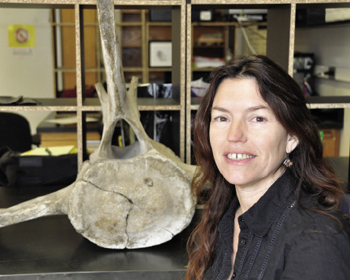 You don’t have to look far to see the irony in the fact that Evon Hekkala, Ph.D., was born in Fossil, Ore.

Old bones, mummies and other centuries-old samples from the animal kingdom are the tools of the trade for the assistant professor of biology.

In recent months, Hekkala’s work in rediscovering extinct species has been featured in notable peer-reviewed publications, in addition to being picked up by the mainstream press. First came her discovery last May with a team of scientists that theRana Fisheri, or Vegas Valley Leopard frog, was not extinct, as was generally believed.

Her most recent discovery, published in September in the journal Molecular Ecology, offered proof of two separate species of the Nile crocodile—one that had been subsumed within the identity of the other for hundreds of years.

In spite of these successes, Hekkala acknowledges her status as an “accidental conservation geneticist.” Originally an anthropology major, she developed an interest in animals after unearthing a reindeer antler and a wooly rhinoceros tooth on her first archeological dig in the south of France.

From there, she went to Madagascar to study the behavior of one of the most primitive of primates, the lemur.

“When I started to study lemurs, I learned that they are extremely endangered,” she said, “and it hit me: how are we going to learn anything from these species if they all go extinct?”

Hekkala decided to devote her career to conservation biology. While working at the California Academy of Sciences, she had an idea: Surrounded by museum specimens, she asked herself, ‘Wouldn’t it be amazing if archival specimens could be used to get genetic information about animal populations from centuries ago, and compare them to the same populations today?’

“I imagined it as a way to sort of time travel,” Hekkala said. “A lot of these specimens are a hundred years old or older. I thought that, by comparing them to populations today, we could better understand what impact human behavior is having.

“In other words, if we put a dam or a road somewhere, are we disrupting the gene flow between two animal populations? Have we fragmented the landscape in such a way that has caused species to not be able to breed with each other over the last 50 or 100 years?”

The short answer, she discovered, is yes.

In the case of the Nile crocodile, Hekkala extracted DNA samples from ancient crocodile mummies from Thebes, held in the Natural History Museum in Paris. She compared those samples with the current Nile crocodile, and discovered that, up until 100 years ago, there were two separate, unrelated species proliferating the region—the “traditional” Nile crocodile and another found to the west, crocodylus suchus.

Moreover, in the last 100 years, one of those species, the more docile Western Nile crocodile, has disappeared from much of its range due to human overharvesting, changes in the way water was used or increasing oil exploration, she said.

“This is a case where we were able to use mummy specimens to identify a new lineage, one that is critically threatened because it is sparsely distributed,” she said. The discovery will be considered for a listing under the Convention on International Trade and Endangered Species (CITES).

“Museum samples can provide a smoking gun,” she said. “Now we can say with scientific certainty that 100 years ago—before we put in a dam, built a superhighway or filled in the Everglades—this was the genetic status of these populations. And that today, those same populations show less genetic diversity or a disruption in breeding.”

Hekkala is currently at work on a new project with old chipmunk specimens from the American Museum of Natural History (AMNH). She is using their DNA to measure whether their Sierra Nevada mountain populations have moved their habitats to a higher elevation in the last century due to climate change.

She has also appropriated an old whale vertebra from the Freeman Hall anatomy collection. She plans to invite students into her lab to sequence its DNA.

“I am enthusiastic about getting young people to discover science,” she said. “A student with absolutely no background in laboratory work can learn how to identify a species using a genetic bar code; DNA bar coding is happening all over the world right now.”

Can old museum specimens play a role in the global development of these barcodes of life?

“Did you know that 90 percent of the AMNH’s collection is behind the scenes?” Hekkala said. “There is so much material to tap into—and all of it is ripe for exploration with new genetic techniques.

“The past can tell us a huge amount about the future,” she said.