Scholars in fields ranging from biology and medicine to theology and law, some with widely diverging views, convened at Fordham University on Tuesday, April 17, to engage in spirited discussions on one of the most controversial issues in science: embryonic stem cell research.

“The debate over embryonic stem cell research is one of the most complex moral issues confronting us today,” said Celia Fisher, Ph.D., Marie Ward Doty Professor of Psychology and director of the Fordham Center for Ethics Education, which organized the conference, “Embryonic Stem Cell Research: Moral Questions for the 21st Century.”

“There is no doubt that questions that arise from the use of human embryonic stem cells in research and medicine require moral deliberation,” she said. “However, moral commitments sustained within a knowledge vacuum nurture argument rather than dialogue. Today, Fordham University … seeks to advance moral discourse on this subject.”

The daylong conference, which featured nine presenters whose views sometimes clashed over such issues as the use of embryos for the harvesting of stem cells and federal funding of such research, came just days after the U.S. Senate passed the Stem Cell Research Enhancement Act, which would do away with funding limits imposed by President Bush in 2001.

Bush has limited federal funding for research to about 60 stem-cell lines that existed before 2001.

Stem cells represent a major scientific breakthrough because they have the ability to renew themselves, and each new cell has the potential to become another type of cell with a more specialized function, such as a muscle or brain cell.

Researchers believe that stem cells, cultured in the lab, could serve as a renewable source of replacement cells to treat everything from Parkinson’s disease to spinal cord injuries. There has emerged, however, strong opposition by those who consider it immoral to destroy an early-stage embryo, known as a blastocyst, to develop new stem-cell lines. 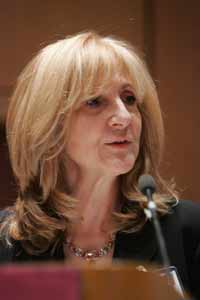 Panelist Melissa A. Henriksen, Ph.D., the Clare Boothe Luce Assistant Professor of Biological Sciences at Fordham, told the gathering of more than 200 people at McNally Amphitheatre on the Lincoln Center campus that there are two types of stem cells: adult and embryonic. Adult stem cells aren’t controversial because they don’t require the destruction of an embryo; they can be isolated from a tissue sample of an adult.

However, Henriksen said that adult stem cells aren’t as potent as their embryonic counterparts, incapable of developing into as many varieties of cells. “One embryonic stem cell,” she said, “can provide all the types of cells that contribute to a human being.”

As result, scientists have been actively pursuing research to develop stem cells that are as powerful as the embryonic variety, but don’t carry the moral and ethical baggage. One line of research, Henrikson said, involves a “virgin birth” process called parthenogenesis in which an egg cell divides to produce an embryo without the use of sperm to fertilize it.

David C. Magnus, Ph.D., associate professor of pediatrics and medicine at Stanford University, said that while he understands why scientists want to develop alternatives to using embryos obtained from fertility clinics and other sources, it is a troubling development.

Science, he said, must hold itself to the most rigorous ethical standards in the conduct of its work, but it must not bow to political or popular pressure.

“I think this whole line of investigation is hare-brained,” he said. “I think as a general principle in science, we don’t take the view that if some people are opposed to research, what we try to do is fine research that we can all agree upon. If we did that, then we’d never fund population genetics because there are people who don’t believe in evolution … .

“As just a matter of principle, it might sound on the surface reasonable: ‘What if we figured out all of the things we could all agree upon,’” he said. “But, in the end, I think it’s a dangerous route for science as a whole to go down because we’d have to give up a lot of hard science on that basis.”

Some of the other speakers, however, outlined their moral opposition to embryonic stem cell research.

Richard M. Doerflinger, M.A., deputy director of the Secretariat for Pro-Life Activities at the United States Conference of Catholic Bishops, said that for him the controversy revolves around human rights — those of the unborn child — and the misguided focus on expensive, “high-end” research such as on embryonic stem cells when the poor in the United States and throughout the world would be better served by making basic medicines more readily affordable and available.

“Among many science bio-ethicists, the traditional ethic has given way and has been replaced by a more utilitarian ethic in which the ends justify the means,” Doerflinger said.

Patrick Lee, Ph.D., professor of bioethics at the Franciscan University of Steubenville, argued in favor of viewing an embryo as a human being. He refuted arguments that while an embryo may be a living thing, it isn’t endowed with the faculties of a human being. 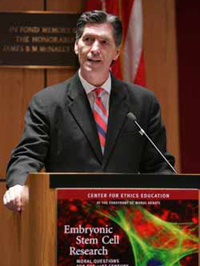 Patrick Lee, Ph.D., professor of bioethics at the Franciscan University of Steubenville, outlines his argument that an embryo is a human being.
Photo by Bruce Gilbert

People come into being, he said, at the moment the organism is created—at that moment the embryo is formed. Moreover, a human embryo is a being with a rational nature and “a basic capacity to develop himself,” he said, “to the point where he will shape his life by rational deliberation and free choice even though it will take him several months, indeed, years to do so.”

Christine Firer Hinze, Ph.D., professor of theology at Fordham, meanwhile, drew on recent work in Catholic social ethics to stress the importance of finding common ground in the stem cell debate. She framed the contentious issue within the wider context of the common good and solidarity with the poor and vulnerable, a group that consists of both the developing embryo and those who are medically ill but have no access to treatment.

R. Alta Charo, J.D., the Warren P. Knowles Professor of Law & Bioethics at the University of Wisconsin at Madison, said that because of the federal government’s limited research funding, there are now eight states supporting embryonic stem cell research, the most robust of which is California, where voters passed a $3 billion ballot initiative.

In the end, Charo said that embryonic stem cell research is moving forward with or without much federal funding and in spite of “the sincere and passionate” opposition of those who view it as a moral wrong. She is convinced that the medical breakthroughs that will flow from the research will improve the lives of everyone in society.

“Many therapies will not be directly traceable to stem cell research at all,” Charo said. “For all the discussion of transplanted tissue, the likely first application of this research is going to be drug development … . It will be very difficult to keep track of every single drug that at any time in its R&D was once tested on cells that were themselves derived from … embryonic stem cells.

“Therefore, I would argue that the benefit of this research, whether wanted or not, will actually wind up accruing to the general population and not just to those who support the research.”

The conference was sponsored by the Center for Ethics Education, the Francis and Ann Curran Center for American Catholic Studies and the Fordham Natural Law Colloquium.