skip to main content
Return to Fordham University
You are at:Home»Inside Fordham»Conference Tackles Issues of Leadership in U.S. Catholic Church 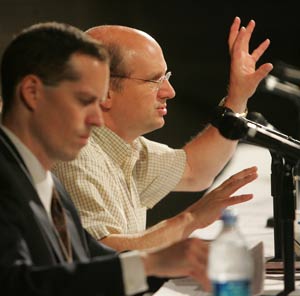 R. Scott Appleby, Ph.D., (right) professor of history and director of the Kroc Institute for International Peace Studies at the University of Notre Dame, discusses new directions in the leadership of the U.S. Catholic Church as moderator Tim Muldoon, Ph.D., director of the Church in the 21st Century Center at Boston College, looks on.
Photo by Bruce Gilbert

Fordham University’s Francis and Ann Curran Center for American Catholic Studies brought together a prestigious group of scholars, priests and bishops on June 9 to examine the current state of leadership in the U.S. Catholic Church.

The conference featured a hard-hitting plenary address by R. Scott Appleby, Ph.D., professor of history and director of the Joan B. Kroc Institute for International Peace Studies at the University of Notre Dame, who told the gathering that the U.S. Catholic Church is in crisis, citing the sex scandal of 2002, alienated Catholic youth and the isolation of priests from the laity.

“The church desperately needs a restoration of authority,” Appleby told the audience at the Leonard Theater at Fordham Preparatory School, “an authority based on a dynamic of innovative and faith-filled leadership that is responsive to the entire community of the faithful.”

All three bishops discussed the shortage of new priests, and when asked by audience members took on the issue of marriage and the priesthood.

Bishop Gerald F. Kicanas, Ph.D., of the diocese of Tucson, Ariz., said that married priests would not solve the problem of what he perceived as the increasing marginalization of religious life in American society. All of the bishops, however, said that a wider discussion of the issue was inevitable in the future.

Bishop Ricardo Ramírez, C.S.B., of the diocese of Las Cruces, N.M., said, “There’s no reason we can’t begin to think about it.”

Appleby, meanwhile, said that the ramifications of the 2002 scandal have been severe for the church. In addition to the suffering of the victims, Appleby said that the church paid more than $1 billion in compensation and legal fees by 2006—money that he said could have been used to fight poverty or bolster a struggling Catholic educational system.

But Appleby also pointed out that American Catholics have not abandoned the church. “The scandal,” he said, “has not resulted in a mass exodus from the pews.”

And Appleby offered some signs of hope and change.

The first was the Charter for the Protection of Children and Young People written by the U.S. Conference of Catholic Bishops. The document establishes lay oversight of the monitoring, conduct and punishment of abusive priests.

And he found great promise in lay-clergy collaboration at conferences and seminars at Catholic universities nationwide, “that invite the bishops to the party.”

For Appleby, discussions like the one held at Fordham about the future in leadership are crucial. In order to integrate the new and old traditions of the church, he said that “nothing less than a conversion is required.”