skip to main content
Return to Fordham University
You are at:Home»Inside Fordham»Conference on Healing and Memories Held at Fordham 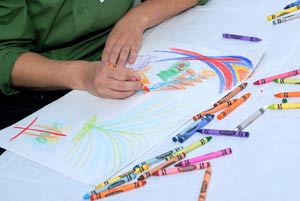 A guest at the conference makes a drawing that represents her life story.
Photo by Ken Levinson

The day “Unabomber” Ted Kaczynski was sentenced to life in prison, his brother David did not feel a sense of relief. It was David Kaczynski who contacted the FBI on suspicions that his older brother was behind a mail-bomb campaign that left three dead and 23 injured.

For David, the end of the trial didn’t bring closure. Yet connecting with some of his brother’s victims shortly afterward worked wonders, he said. In fact, he remains friends with one of the survivors.

“In some ways, it is a magical feeling,” said Kaczynski, who spoke at an Oct. 15 conference at Fordham on forgiveness and reconciliation. “We took this excruciating pain and turned it into compassion.”

Kaczynski, director of New Yorkers Against the Death Penalty, and Susan Xenarios, founder and director of the Crime Victims Treatment Center at St. Luke’s-Roosevelt Hospital Center, were guest speakers at “Forgiveness and Reconciliation as Components of Violence Trauma Therapy: An Experiential Sampling of South Africa’s Institute for Healing and Memories.”

The conference was sponsored by the Office of the Vice President for University Mission and Ministry at Fordham.

“We live in a world that is quite divided on many issues—race, the rich and the poor, tribal and religious groups,” said Patrick Ryan, S.J., vice president of university mission and ministry at Fordham. “People have suffered deep trauma and wounds in their lives.”

Michael Lapsley, SSM, who has made working with victims of trauma his life’s work, led the conference. Father Lapsley is director of the Institute on Healing of Memories in South Africa, which he founded in 1998. He frequently holds workshops in countries wracked with war, oppression and conflict.

“We were a damaged country,” Father Lapsley said, referring to the pain and suffering apartheid brought to South Africa. “It brought me to some conclusions: We had ‘over-expertized’ the response to human pain. We undervalued the wisdom of the ages. Often, the victim is blamed. We realized that we needed to acknowledge pain. We said, unequivocally, torture is torture, no matter who did it.”

During the apartheid struggles, Father Lapsley was chaplain to the African National Congress. While in exile in Zimbabwe, he received a letter bomb disguised as a religious magazine. The device exploded, resulting in the loss of both hands and an eye.

From his personal healing process he developed the idea of victims’ empowerment through storytelling and healing rituals that emphasize forgiveness, reconciliation and social action on behalf of other victims of violence.

“What happened to me was that my pain was acknowledged,” Father Lapsley said. “I was loved, prayed for and supported.”

About 70 social workers, employees of religious organizations, clergy and staff from Fordham’s campus ministry attended the daylong event. Participants explored the “healing of memories” methodology used in Father Lapsley’s workshops, such as drawing something that uniquely expresses their life stories and then discussing the finished products in small groups.

Participants were asked not to give advice.

“Listen with the heart, not just the ears,” Father Lapsley said. “This is not a workshop where we tell people how to live their lives. We simply try to create a safe space.”