skip to main content
Return to Fordham University
You are at:Home»Inside Fordham»Conference Measures Height of ‘Glass Ceiling’ for Women 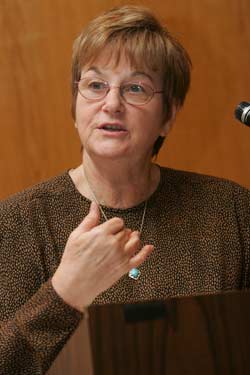 Roslyn H. Chernesky, D.S.W., says that women can get ahead in the workplace by being likeable while demonstrating exceptional competence.
Photo by Bruce Gilbert

It seems that powerful women are ubiquitous on the national stage.

Gov. Sarah Palin of Alaska was the first woman vice presidential candidate for the Republican party; Condoleeza Rice is secretary of state; Nancy Pelosi is speaker of the house and Sen. Hillary Clinton ran a hard-fought campaign again president elect Barack Obama during the Democratic primary.

So why is there a lack of women in leadership positions generally?

Roslyn H. Chernesky, D.S.W., a professor in Fordham’s Graduate School of Social Service (GSS), is trying to find out. Chernesky, who has researched women in management for the better part of her academic career, discussed “The Conundrum of Women in Leadership Positions” on Oct. 27 at the Lincoln Center campus.

The conference was sponsored by the GSS Institute for Women and Girls.
“I looked back on my research over the past 30 years and realized that some of the questions I raised then are still being asked today,” said Chernesky, former chair of the administration concentration at GSS.

“These questions have to be asked and we have to come up with answers because it’s the only way we’re ever going to do anything about it,” she said.

Chernesky has found three obstacles for women looking to advance in their fields:

• Competent women are not considered likeable, and exceptional competence makes them even less likeable and less influential.

• Women who exercise leadership in ways that conform to how women are expected to act, such as showing empathy or being nurturing, are not considered leaders because they are doing “what women do.”

• Women who manage or supervise in hostile workplaces tend to become “toxic handlers” who mediate between employees, reduce tensions, and address biases and disparities. This can cause symptoms and conditions, such as burnout, which demonstrate women are not capable of executive management.

Chernesky highlighted the obstacles—politically correct or not—that she said has kept women from reaching the top of the career ladder over the past four decades. In the 1970s, for example, some put forth notions that women themselves were responsible for their lack of advancement, Chernesky said.

“People said it was the way women were raised,” she said. “It was very much the blame-the-victim mentality.”

Also in the 1970s, it was said that women made choices to remain in the positions they were in and failed to invest in their future to obtain the necessary training and experiences that would prepare them for top-management.

“I knew it wasn’t true,” Chernesky said. “I had a lot of women enroll in my administrative classes. They were out there pounding the streets looking for these jobs.”

The 1980s focused on external barriers keeping women down, Chernesky said. Women found themselves in positions of blocked mobility, powerlessness or irrelevancy.

“A great example of this is supervision,” she said. “They have a title, but often can’t do what they ought to do because they aren’t given the necessary resources or authority.”

By the mid-1990s, the major media looked into management styles. “Popular literature, such as Timeand Newsweek, said what America needed is a management style that promoted nurturing and teamwork,” she explained. “All of a sudden what women were doing became the thing to do.”

Still, women weren’t guaranteed a leg up. Chernesky found that when an organization needed to hire a woman to look good, they did so. “But those who didn’t get any pressure didn’t do it, because there was no incentive,” she said.

By 2003, Chernesky found that the gender of those making the hiring and promotion decision did not affect who gets promoted.

“There’s no evidence that men discriminate more than women when it comes to promotions,” she said. “Instead, we found that women tend to be promoted in organizations where they already have a cohort of women working in their agency.”

So what can be done about these conundrums affecting women who wish to break through the glass ceiling?

“When you want to go to the top, you have to move out of your organization to a new one,” Chernesky said.