For women and girls living in rural areas around the world, life itself is a desperate situation. 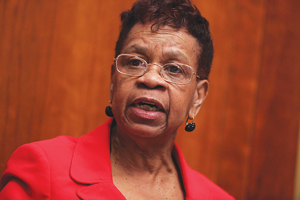 On a daily basis, millions face chronic poverty, discrimination, and unbridled violence, said presenters at “Empowering Rural Women of All Ages Through Urban and Rural Partnerships,” a Graduate School of Social Service (GSS) conference hosted at Fordham on March 3.

“In many parts of the world, women are so beaten down that they don’t even realize what strengths they have or what resources [exist],” said speaker Catherine Alicia Georges, M.D., chairperson of the Department of Nursing at Lehman College, CUNY, and president of the National Black Nurses Foundation.

According to Dr. Georges, who has worked with various organizations to assist nurses, midwives, and medical workers throughout Africa, discrimination against women compromises healthcare in rural areas. Although women are the primary health care providers in many villages, their lower social status reduces their ability to fully care for their patients.

“We have to figure out how to help these persons recognize their own strengths,” Dr. Georges said, “in order to get them connected to what they could do for the community and for them to affirm who they are.”

Overall, the 153 million Chinese workers who migrate from rural areas to find work in cities receive a significantly smaller salary than their urban peers and work up to 10 hours per day, seven days a week, Gao said.

For women, however, these numbers are more dismal. More than half of female migrant workers labor seven days per week for an average of 12 hours a day, while earning only 73 percent of what their male counterparts earn.

In addition, female migrant workers do not have access to maternity leave or child care.

Romanian women suffer equally bleak circumstances, said Marciana Popescu, Ph.D., associate professor of social work. For one rural group known as the Roma, women’s illiteracy and unemployment can be as high as 100 percent. Because it is not uncommon for girls as young as 10 to be promised into marriage, the Roma have little reason to devote scarce resources to educating girls.

Popescu has also worked with women and girls of the impoverished Bayetes, or sugar cane settlements in the Dominican Republic and Haiti. There, she has discovered the startling connection between rape and the availability of cooking fuel. The dearth of fuel drives some women to exchange sex for fuel.

“How do we start the process of empowerment to make sure that not only do we empower women in rural areas in general, but that we target the most vulnerable women in rural areas? Because they are most invisible, you will see not see women from these groups present in any decision-making,” Popescu said.