skip to main content
Return to Fordham University
You are at:Home»Inside Fordham»Conference Explores Millennials and the Church 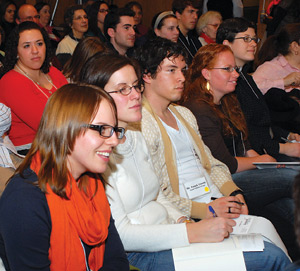 Millennials turn out on Jan. 29 for a conference on why young adults drift from the Catholic Church.
Photo by Ken Levinson

Generational differences dominated the discussions on Jan. 28 and 29 when Fordham hosted a forum and daylong conference on young adults and the Catholic Church at its Lincoln Center campus.

“Twenty-Somethings and the Church: Lost?” attracted 600 people seeking to understand why so many young adult Catholics have strayed from the church and its institutions.

Citing statistics from the Pew Research Center, keynote speaker James Davidson, Ph.D., author of Catholicism in Motion: The Church in American Society (Ligouri/Triumph, 2005) depicted a church that has lost more people in absolute numbers than any other religious group in the United States has.

The result, said Davidson, is a church going through its biggest institution-closing period: shutting down schools, colleges, convents and seminaries, and consolidating parishes in record numbers. Some 23 million people, one-third of those who were raised Catholic—now far more culturally assimilated than their Catholic parents and grandparents—are choosing other religions or are simply adrift.

Davidson said the church has an opportunity to win back those young adult “cradle Catholics” who have chosen “nothing in particular” as their religion. By Canon Law, said Davidson, they are still Catholic, and many of them still think of themselves that way.

“We no longer benefit from the social conditions that fostered a demand for organized religion in the first half of the 20th century,” said Davidson. Today, people marry at a later age, have fewer children and are economically better off. “We have new challenges to address. We must reach out to people who live in circumstances that discourage religious involvement.”

Respondent Melissa Cidade, director of pastoral assistance surveys and services at Georgetown University’s Center for Applied Research in the Apostolate, agreed that millennials (roughly those born between 1980 and 1995) weren’t so much “lost” as they had lost interest in outdated institutions. Millennials are the generation least likely to attend Mass; they attend reconciliation less than once a year and they don’t observe holy days of obligation, she said.

But they hold attitudes and beliefs about faith that are remarkably similar to those held by previous generations of Catholics: Millennials are more likely than Vatican II Catholics, Cidade said, to seek moral guidance from the church, to believe in the Eucharist and to support the Pope.

“Young adults have attitudes and beliefs that are right, but there is an institutional mismatch,” said Cidade, the only millennial on the panel. “The church is not speaking to them in a way that is salient. It’s not getting them out of bed [to attend Mass].”

Cidade said that the church should be more inclusive of young people—especially when they make an effort to visit a parish or embrace an institution—by tapping into those beliefs they already share.

“They are coming to the church looking to be welcomed,” Cidade said. “It is more important to say, ‘Welcome back, my prodigal son,’ than to ask, ‘Are you on the pill?’”

Taking issue with Davidson’s interpretation, Putnam said that only one-third of today’s young Anglo-Catholics are still devout enough to be considered Catholic. The young adults who are Catholic in name only, he said, are “doctrinally unfaithful.”

“Most important for the future, they are not raising their children as Catholic,” he said. “This is really a much more serious and threatening problem than has been described so far.”

A Methodist who converted to Judaism, Putnam said he believes in the “prophetic role of religion… to assert important values contrary to the norms of society.”

Putnam said that the Catholic Church will have to “choose its battles carefully” if it is to win young adults and avoid being indistinguishable from mainline Protestantism.

“I am not arguing for a purely market-driven church, but the church has to be thinking about, ‘What do I want to insist on, and what I want to de-emphasize,’ in order to save more souls,” he said.