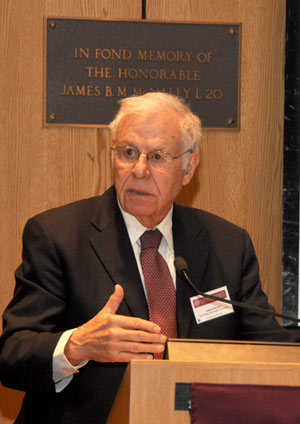 The erosion of personal privacy in an increasingly technological society raised the ire of some ethics scholars at a daylong conference on April 21 at Fordham University.

“Privacy Rights and Wrongs: Balancing Moral Priorities for the 21st Century” attracted academics in social science, public policy and law to discuss whether there is any personal space left in a society where surveillance is common and where boundaries between the public and private are blurred.

“We used to say that your home is your castle . . . but certain behaviors are no longer covered by that principle,” said Amitai Etzioni, Ph.D., University Professor of International Affairs at George Washington University and director of the Institute for Communitarian Policy Studies. “We are constantly renegotiating that boundary.”

Etzioni, whose institute emphasizes the importance of communities in shaping behavior, said that society requires a balance between an individual’s privacy and what is best for the “common good.” The two are in conflict, but issues can be resolved “case by case,” he said.

He cited an example of balancing the two: The routine testing of newborns for HIV. For years taking blood from newborns to test for genetic defects has been routine, but when neonatal tests began in the 1990s for HIV, some charged that it violated the privacy of the mother. To Etzioni, the potential saving of a life outweighed the mother’s privacy issue.

Conversely, the ease with which private medical records were available in the 1990s offered nothing to the “common good” but was exploited, Etzioni said, by insurance companies to learn of pre-existing conditions that potential policyholders may have.

But balance has to be protected, too, he said. Oversight of regulatory agencies should be given to civilian review boards to make sure that private information—such as a driver’s
E-ZPass records—does not sit for years in publicly accessible databases.

“The question is, can you trust the government, the authorities, to do what they tell you they do,” he said. “We cannot rely on Congress or the courts only, but need something [more]to ensure the balance does not get out of kilter.”

Etzioni also stressed the importance of community in a society. He said “it takes a village to prevent a crime,” that the desire for social conformity keeps most anti-social behavior in check. “The more you rely on social fabric, the less you need the police.”

The daylong event was sponsored by Fordham’s Center for Ethics Education and Fordham Law School’s Center on Law and Information Policy (CLIP). It included a series of panels on the definition of privacy in the 21st century, privacy and terrorism and privacy and personal information.

Speaking on “Privacy, Technology and the Flow of Personal Information,” Helen Nissenbaum, Ph.D., professor of media, culture and communication at New York University, said that the public gets “freaked out” by socio-technical systems when informational norms are breached.

“There is a vast difference between Google Maps showing people on the street through telescopic lenses, and what people expect when they walk down a public road,” said Nissenbaum, author ofPrivacy in Context: Technology, Policy and the Integrity of Social Life (Stanford University Press, 2009).

Fellow panelist Joel Reidenberg, Ph.D., a Fordham professor of law, founding director of CLIP and associate vice president for academic affairs, said that both commercial collection of personal data and government purchase of such data have threatened democracy by creating a “transparent citizen, but a non-transparent government.”

In response to recent remarks on the subject of privacy and the law made by U.S. Supreme Court Associate Justice Antonin Scalia, Reidenberg assigned his students to compile a dossier on the justice.

Reidenberg described what types of information they were able to find at the privacy conference, prompting a story in the online tabloid Above The Law.

That, in turn, spurred an angry retort by Scalia, followed by a rebuttal by Reidenberg and another story, this time in the ABA Journal.