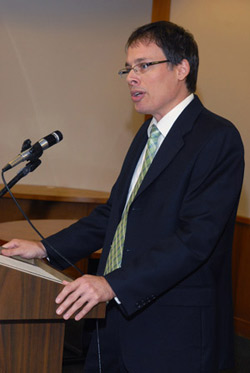 George Demacopoulos, Ph.D., argues that the Turkish government should acknowledge the Ecumenical Patriarch’s jurisdiction over the city of Istanbul.
Photo by Ken Levinson

Though recent developments shine a glimmer of hope toward religious freedom in Turkey, there is still a long way to go, scholars and legal experts said on Sept. 16 at the Fordham School of Law.

• Almost all of its property has been seized by successive Turkish governments.

• Its schools have been closed and its prelates taunted by extremists who demonstrate almost daily outside the Patriarchate, calling for its ouster from Turkey.

• His All Holiness Bartholomew, Archbishop of Constantinople, New Rome is denied his title of “Ecumenical” Patriarch.

Established in the fourth century, the Ecumenical Patriarch once possessed holdings as vast as those of the Vatican. Today, the Turkish government will not acknowledge the Patriarch’s title over a dispute about the translation of “ecumenical” and whether or not it means the patriarch has any jurisdiction over the city of Istanbul, said panelist George Demacopoulos, Ph.D., associate professor of theology and co-founding director of the Orthodox Christian Studies program.
“I would not be the first scholar of Byzantine Christianity willing to admit that a succinct translation of the term … is simply impossible,” Demacopoulos said, referring to translations of ecumenical as “imperial” or “universal.”

“The exact translation is irrelevant,” he added. “What is relevant is that the title was embedded in Roman law as early as the sixth century because Christians throughout the world understood that the Patriarch of Constantinople played an international and transnational role in the leadership of the Christian community.”

Panelist Emanuel Demos, Esq., general counsel for the Greek Orthodox Archdiocese of America, briefly discussed some of the persecution of the Patriarchate throughout the years, such as the pogrom of 1955, riots driven primarily by Islamic fanaticism that targeted the Greek population of Istanbul with the intent of driving non-Muslims from Turkey, and the closing of the Halki seminary in 1971 by Turkish authorities.

The Orthodox Christian community did have cause for celebration last year, however, when a case brought against the Turkish government by the Ecumenical Patriarch himself was ruled in his favor.

In July 2008, the European Court of Human Rights ruled that the 1964 evacuation, closing and subsequent taking of an orphanage once owned by the Patriarchate was unlawful.

“Even the name of the case was significant—‘Ecumenical Patriarchate vs. Turkey,’” Demos said. “In the opening paragraph of the case, they indicate the Patriarchate is ecumenical and ‘unites the Orthodox community,’ shooting down the things the Turkish government has denied.”

Demos said Turkey’s 2005 application to the European Union (EU) could be a positive development for the Orthodox Christian community, as the country would have to adhere to the EU’s religious protections.

“What I’ve seen in looking at issues of religious minorities more broadly in the European Court is that the court tends to be more conservative in its rulings and upholds whatever the state regulation requires,” Teitel said.

The European Courts have justified civil liberties in a number of cases in countries such as France and Switzerland, where Islamic women were banned from wearing head scarves in public as a way to maintain order and avoid giving preference to any religion, Teitel said.

“There are a number of countries in Europe that … have this idea that public domains need to remain antiseptic and free of religious symbols,” she added. “My concern is that Europe, because of the specter of Islam, will end up coming out with a case law that is … more along the lines of those countries.”

His All Holiness Bartholomew, Archbishop of Constantinople, New Rome and Ecumenical Patriarch, will receive an honorary degree from Fordham on Oct. 27. Archbishop Demetrios, the primate of the Greek Orthodox Church in America, attended the conference and thanked organizers for “shedding light on a complex issue.”

He recalled attempts by Presidents Bill Clinton and George W. Bush to convince Turkish officials to reopen the Halki seminary. This past April, President Barack Obama also urged the prime minister of Turkey to reopen the seminary.

“It was a nice meeting. It went so beautifully,” he said, “but then there was a unanimous decision against it, which, to me, indicates the unpredictability on the part of the Turkish government.”

The conference was sponsored by the Law School’s Institute on Religion, Law and Lawyer’s Work and Fordham’s Orthodox Christian Studies program.

“The questions we are exploring tonight are of particular interest and concern, not only for the Orthodox community, but for anyone who would like to see the protection and growth of religious freedom, anywhere in the world,” said Amy Uelman, director of the institute.