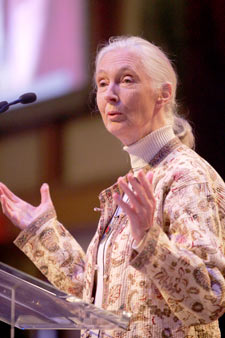 Jane Goodall speaks to educators at the third-annual Celebration of Teaching and Learning.
Photo by Bruce Gilbert

Primatologist and conservationist Jane Goodall told a roomful of eduators that their occupation was the highest calling, and that they can look to her program, Roots & Shoots, to help students achieve their highest potential.

Goodall delivered the keynote address at the third-annual Teaching & Learning Celebration, a professional-development conference on March 7-8 and co-sponsored by Fordham’s Graduate School of Education (GSE) and public television stations Thirteen/WNET and WLIW 21, among others businesses.

“You as teachers know more than anyone else, every child should have an opportunity, but you know that children have different capabilities,” she said to prolonged applause. “Roots & Shoots does one thing for young people, for those young people particularly who will never succeed as defined by western culture. They’re not going to be successful business people, they’re not going to be pop stars. But what about being decent human beings?”

Goodall started Roots & Shoots in 1991 with 16 high school-aged students in Tanzania, where she conducted groundbreaking research on chimpanzees in the 1960s. Her program has grown to include 8,000 students in 96 countries. With an emphasis on empowering youth to do projects that help the environment, animals or humans, it is meant to give hope to those who are demoralized by environmental destruction.

She noted that teaching students to write to legislators and improve their communities can be very empowering, especially when the students realize there are thousands of others doing the same work.

“You hear ‘think globally, act locally,’ but quite honestly, if you spend too long thinking globally, you don’t have the energy to act locally,” she said to a smattering of laughter. “It’s too depressing.”

Goodall’s speech, in the grand ballroom of the Hilton New York, was held on the first day of the conference, which featured 90 hands-on workshops and more than 100 vendors. GSE was represented at an information booth adjacent to one manned by the Bronx Zoo, with which it recently entered into a joint master of science degree program. Fordham professors also delivered lectures such as “Pressures on Suburban Adolescents” and “Teaching for Creative Problem Solving.” 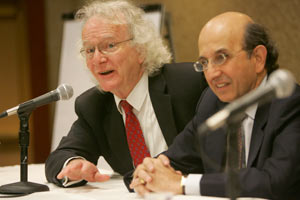 James J. Hennessy, Ph.D., dean of the Graduate School of Education, sat on the first panel of the day, “Effective Classrooms: What Matters Most.” With National Education Association executive director John Wilson and New York City Department of Education chancellor Joel Klein on the panel as well, they addressed topics such as merit pay for teachers. The topic took on particular importance in light of a New York Timesstory that day about a charter school in Washington Heights where salaries are to be $125,000—nearly double the current average.

The panel, which also featured Joseph Aguerrebere, president and CEO of the National Board of Professional Teaching Standards, and Brenda Welburn, executive director of the National Association of State Boards of Education, delved into testing, with Wilson declaring that the much of the testing mandated by the federal No Child Left Behind act to be a mess.

Hennessy recommended removing tests as an indicator of an end point. “Take test data that teachers are gathering in the classroom, use them proscriptively, and take the findings to help move achievement along for individual children,” he said. “Tests aren’t the issue; it’s the use of the data that we have that really becomes the problem.”

Klein cautioned that basic reading and math are indispensable and should always take precedence over higher order skills or creativity.

“The thing that shocked me the most when I became chancellor was I walked into high schools and talked to some very sharp kids who came into the school system a decade ago and couldn’t read,” he said. “And shame on us.”

He also pointed to Fordham’s recent partnership with the school system as an example how the city is taking bold steps to reinvigorate its public schools. With research showing that quality teachers are more effective than initiatives such as free laptops, Klein said the support systems for teachers are more important than ever.

“Each principal, for the first time, can hire, so to speak, the bureaucracy they want, and they charge different things,” he said. “Jim Hennessy says to me, he’s got a great product at Fordham at a good price point, and I said, ‘You know, for an ed school dean, you’re pretty hip in the corporate culture.’ So my schools now are deciding which kind of support structure is most efficient and effective for them, and how much they want to spend.”