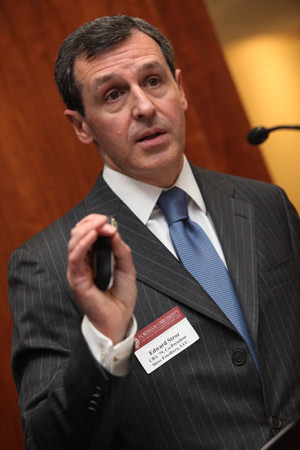 Edward Stroz, CBA ’79, cites litigation against the Enron Corporation to show how an informatics analyst can uncover the smoking gun in a case.
Photo by Michael Dames

Trial lawyers should broaden their expertise in electronic data collection if they hope to present the best evidence, an expert in electronic discovery said on April 9 at Fordham.

Edward Stroz, CBA ’79, founder and co-president of the global consulting firm Stroz Friedberg, LLC, said that the field of information science—known as informatics—has become critical to the collection, delivery and analysis of data now that millions of documents exist electronically. Stroz delivered the 2010 Clavius Distinguished Lecture presented by the Department of Computer and Information Science.

Informatics is the science of gathering, interpreting and transforming information into connected computer networks and complex systems. While certain fields of science have begun to use informatics to further their disciplines, the justice system lags behind, Stroz said.

“I know a fair amount about evidence, and it has struck me that the use of informatics in our justice system has been rather unexplored,” said Stroz, a former special agent for the Federal Bureau of Investigation who specializes in computer crime. “Many lawyers who have a little gray hair are still in the Stone Age when it comes to understanding how electronic documents compare to paper documents.”

In his lecture, “The Role of Informatics in Our Justice System,” Stroz outlined some pitfalls of having an inexperienced team parse electronic data to present as fact in a courtroom:

• Some lawyers misunderstand the term “create date” in a document’s metadata and, therefore, may make an innocent, yet mistaken, analysis of how long a document has existed;

• An altered electronic document may be erroneously admitted into evidence;

• Lawyers may not be able to tell the difference between “original” and “duplicate” electronic documents.

Conversely, Stroz cited the “immaculate memo” in a famous Enron litigation as an example of how an informatics analyst can uncover the smoking gun in a case. The memo, which proved that Enron manipulated a $7 million sale, was rumored to exist, said Stroz, but nobody had allegedly “handled” it. It was eventually discovered in a network share file with the use of forensic programming, said Stroz, and introduced into evidence.

In today’s world of e-mail, BlackBerries, hard drives, multiple servers and off-site storage, Stroz said, practically nothing is wiped out. Even a suspect’s Internet search trail can be revisited to prove intent.

Because of the relative newness of the field of electronic discovery, Stroz said, many people today want third-party assurance that data identification, preservation and production has been done right.

Among the challenges that informatics can address, he said, is the need for a common lexicon to facilitate better mining of data and keyword searching. In the past, Stroz said, keyword searches have been shown by studies to be extremely inaccurate, missing up to 70 percent of the relevant data.

“This shows a need for increased dialogue between lawyers and people who are information scientists,” he said. “If you don’t get all the material and preserve it, you could miss one document even if you get 99.99 percent of the documents.

“[And] it could be the fact that turns everything on its head,” he said.