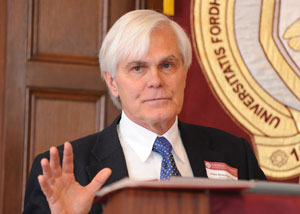 The third annual Communitas alumni reunion on March 28 honored one great research scholar and one outstanding mentor, both from Fordham’s Graduate School of Arts and Sciences.

John Disterhoft, Ph.D., (GSAS ’68 and ’71) delivered the spring Gannon Lecture, which delved into the mysteries of the brain in “Learning in Young and Aging Brains: A Neuroscientific/Psychological Perspective.”

By applying neuroscientific measurements and behavioral tests, Disterhoft’s research into the hippocampus—the area of the brain involved with associative learning—has deepened the understanding of how a person’s ability to learn deteriorates as the brain ages.

When older animals were tested, their associative learning was much slower. Further in-vitro testing confirmed that on a cellular level, the animals’ “excitability” during learning had significantly decreased as well.

“Even though we’ve had to do most of these experiments in animal models to actually characterize the cellular changes, we can assume that humans have the same kinds of cells,” said Disterhoft, who is the director of the Northwestern University Interdepartmental Neuroscience Program and the Ernest J. and Hattie Magerstadt Memorial Research Professor of Physiology at the Feinberg School of Medicine. “We know that as these neurons become less excitable, it contributes to one characteristic of Alzheimer’s disease—learning impairment.”

Disterhoft’s decades of research have helped in the development of drugs that “stimulate” the hippocampal neurons, thus offering hope to Alzheimer’s patients for increased learning capacity or possible reversal of memory loss. Further research is being done to determine how the brain permanently stores information in the neocortex, Disterhoft said.

Disterhoft, who is a fellow of the American Psychological Association and recipient of the prestigious MERIT award from the National Institute on Aging, said he first developed an interest in the science of learning as a GSAS student.

“At Fordham, I had mentors who exposed me to the idea that the brain really controls behavior,” he said. “My approach [to research]reflects the training and interest that I had here.”

Nicolas G. LaRocca, Ph.D., (GSAS ’72 and ’81) complemented Disterhoft’s lecture with a presentation on how such research can help patients with multiple sclerosis. LaRocca is vice president of health care delivery and policy research at the National Multiple Sclerosis Society.

Following the lecture, some 160 GSAS faculty and alumni celebrated the 75th anniversary of Fordham’s Department of Psychology by honoring the department’s former chairman, Marvin Reznikoff, Ph.D., professor emeritus of psychology, with a Sapientia et Doctrina medal and a scholarship in his name.

Reznikoff, who taught at Fordham from 1968 until 2007, mentored more than 80 doctoral candidates in the department and received 14 research and training grants.

“As my circle of contacts grows, the importance of the contributions by one very special individual is mentioned over and over again,” said Nancy Busch, Ph.D., dean of GSAS. “Tonight we celebrate [his]pivotal role in the department’s history.”

Now in his eighties, Reznikoff received a standing ovation from faculty, friends and former students. He was lauded for his guidance, compassion and inspiration, and for mentoring what is thought to be a record number of dissertations within the department.

“People of my age have seen many moments,” said Reznikoff, recalling such close bonds with students that he even walked one of them, Mary Byrne, Ph.D., down the aisle when she married. “Fordham has been the centerpiece of my life, and it will continue to be for ever more.”

Communitas ’09 was GSAS’s third annual celebration of social and academic activities for alumni and friends at the Rose Hill campus.