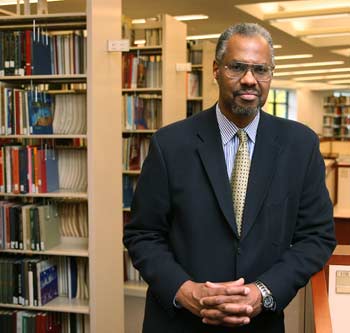 It’s tough to make sense of the ever-evolving media landscape, according to Arthur Hayes, associate professor of communication and media studies.

New tools make Internet publishing easier than ever, while newspapers are hemorrhaging jobs and money at an alarming rate. These are indeed “interesting times” for the news business, said Hayes, an ex-Wall Street Journal legal journalist.

“I have read about periods of great transition and wondered why some people failed to see, or refused to recognize, the change that seemed obvious retrospectively,” he said. “So it’s fascinating to live through such a period. Even today, some people may happily say, ‘I want to be a dinosaur. I refuse to go on, to be part of the digitalized society.’ To some degree, I share that view.”

As a teacher of undergraduate and graduate courses on reporting, editing, media industries and law, Hayes strives to ensure that students can understand the history of specific media and embrace the changes that are driving people from printed newspapers and toward online news sources. But before he can do that, Hayes, who earned his bachelor’s and master’s degrees at Fordham, trains them to pay attention to the news.

It’s harder than one would think, even for students who ostensibly want to work in the news. EvenThe Daily Show and The Colbert Report, which Hayes praises in his latest book, Press Critics Are The Fifth Estate: Watchdogs in America (Praeger, 2008), do not elicit as much excitement as he would expect as a critic. That’s a shame, Hayes insisted, because Stewart is an important a critic of the press.

“His critiques of the media, which he does almost every night, are based on a very solid understanding of what he believes is the core function of the media in society,” Hayes said. “That’s what Stewart articulated on Crossfire in 2004, which is basically, ‘Stop, stop, you’re hurting us. Your job is supposed to be giving us information and analysis so we can make informed decisions. But you’re not doing that. You’re just yelling at each other and spinning the Republican and Democratic talking points.’”

Press Critics began as a platform for Hayes to analyze the failure of Brill’s Content, a media-watchdog magazine geared toward the general public that published from 1998 to 2001.

“It had been the traditional response from mainstream media that critics were a threat to their First Amendment liberties. They thought the only critic they needed to know was the marketplace,” he said. “I started writing a defense of press critics as performing a valuable service in democracy by analyzing a powerful institution—the Fourth Estate.”

Having earned a law degree from Quinnipiac University, where he was the director of the graduate journalism program before coming to Fordham, Hayes is at ease discussing how media have been promoted and restrained by law—from the first printed word through the eras of telegraph, radio, television, film and the Internet. Whereas books were granted the full protections of the First Amendment, media that emerged thereafter were greeted with increasing restrictions.

Bucking this trend was the Supreme Court’s 1997 decision in Reno v. American Civil Liberties Union, which gave Web content the same freedoms enjoyed by books. For Hayes, a fierce defender of the First Amendment, it signaled that the court had come full circle.

“Though many people don’t necessarily agree with me, I believe in social conflict theory. Progress is often made when people, voicing unpopular ideas, are allowed to confront the status quo in the public sphere. For example, the civil rights movement, or any sort of protest movement, is often the kind of speech that would be unacceptable to the status quo.”

Decisions such as Reno v. American Civil Liberties Union are the meat of Mass Media Law: From the Printing Press to the Internet, a textbook that Hayes is writing.

“No one has linked case law to the development and use of a particular media technology in our society on a systematic basis,” he said.

Thinking about how analog technologies—such as the camera—were received is not an idle pursuit, considering the way digital technologies have changed so much of our society.

“Today, we’re wrestling with convergence of technologies. How should, for example, the law treat AT&T when it provides content through cable television, which it didn’t do when it was just a common carrier under the law,” he said. “Here and abroad, lawyers and policy makers are wrestling with such issues. It’s timely for us to take an historical and legal perspective to better understand the possibilities of our mass media future.”