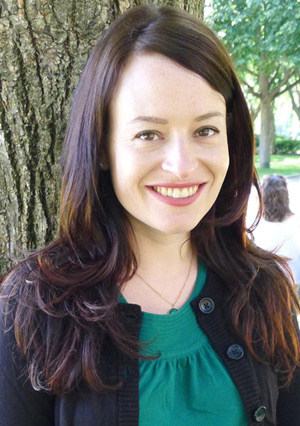 The promise of social media when it first appeared in 2006 as “Web 2.0” was a lofty one. Sign up for Twitter, Facebook, or YouTube, the thinking went, and the right amount of self-promotion, cleverness, and moxie could make you rich and famous.

The folks who created Web 2.0 felt the same way about themselves. All one needed to strike it rich, it was believed, was a revolutionary idea and a mastery of programming.

Alice Marwick, Ph.D., says that archetype of the self-made entrepreneur is largely a myth.

“When you actually tease out the social dynamics of Silicon Valley, you find that it’s really about having access to people and resources,” said Marwick, an assistant professor of communications.

Marwick, a social-software researcher, spent a year living in San Francisco in 2008, and the research she conducted there formed the basis of Status Update: Celebrity, Publicity, and Branding in the Social Media Age (Yale University Press, 2013), published last month.

Status Update delves into three techniques that social media promotes: self-branding, micro celebrity, and life streaming, which consists of sharing information about what you’re doing as you go about your day. Marwick is not a fan.

“Far from being participatory and democratic, people in Silicon Valley were instead encouraged to present themselves online and interact with others in these very commercialized ways,” she said.

“They were encouraged to create self-brands, or to think of themselves as celebrities, and try to sell themselves to other people. The metric of success was therefore how many followers you had.”

What surprised Marwick was the sexism in the industry. Women make up a tiny percentage in the field, and are also less likely to major in computer science in college today than they were 1970.

“There’s an assumption that it’s because there’s a lack of merit—that if women were good at coding or good at what they did, they’d be getting funded and starting companies,” she said.

In fact, Marwick said that venture capitalists are so enamored with a certain type of entrepreneur—notably a male who is Harvard- or Stanford-educated—that there’s a term for it: pattern recognition. Men will mentor other men, but when a man mentors a woman, there’s an assumption that she’s returning the favor physically.

Marwick is quick to note that it’s not technology per se that leads to sexism. San Francisco is in many ways a company town, and the lack of people working in media, fashion, and finance makes it more of a closed loop than New York City’s tech industry, for example.

“I think New York techies tend to be a bit more humble, because they are constantly interacting with people who aren’t in tech, and constantly having to try to justify their existence,” she said.

Her research will focus on how the average person practices online privacy, with an emphasis on everyday practices. She cautions that there are frequent moral panics over online conflict, resulting in misguided laws around social networking or “online predators,” and emphasizes that she does not want her research contributing to poorly thought-out legal remedies to social problems.

In spite of her critical assessment of Silicon Valley, Marwick calls the Internet and social media a “great love.” She teaches social media to undergraduates and has used their insights in a recent paper she authored about Instagram.

“I would almost always say I’d rather hang out with technologists than investment bankers,” she said.

“I like the sort of ‘Lets use our powers to figure these different problems out’ attitude. I just think that the industry has so much more potential.”

Watch the video below to learn more about Marwick’s social software research: