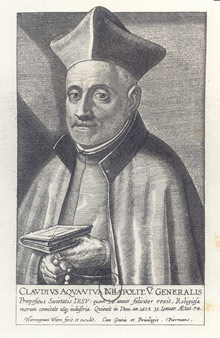 Claudio Acquaviva, superior
general of the Society of Jesus

As Jesuit colleges and universities multiplied in the latter half of the 16th century, certain questions kept recurring—about curriculum, teaching methods, textbooks and procedures. Never had the world seen such a large network of schools; ensuring quality control and consistent standards grew more pressing, especially among Jesuits who sought consistency as they moved from school to school.

After many drafts and much consultation among Jesuits, the Ratio Studiorum, or plan of studies, was announced in January 1599 by Claudio Aquaviva, superior general of the Society of Jesus. Unlike the training documents of other religious orders, it applied to the education of lay students as well as Jesuits, and it included humanities—such as literature and history—along with the theology and philosophy traditionally studied by clerics.

It reflected the best educational practices of the day, and helped establish the world’s first true system of schools.